Breaux Bridge Mayor Jack Dale Delhomme defends a controversial ordinance that would tightly control who is allowed to set up residence in the town’s historic downtown. 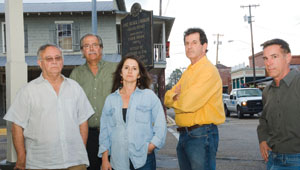 Breaux Bridge mayor Jack Dale Delhomme has trouble staying in his chair. That’s the high school basketball coach in him, leaping from the bench when times get tough on the court. But not even the pressure of state playoffs raised the 66-year-old mayor’s temperature as much as the fracas going on in town over the adoption of a new zoning ordinance. “This is my town,” he says. “I was born, raised and graduated here. Too many laws destroy passion. But if you don’t have some kind of rules, everybody’s helter skelter.”

The proposed zoning ordinance updates the town’s antiquated one, bringing definitions and permitted activities into the 21st century. What has caused a tempest is the narrow interpretation of what is permitted, and prohibited, in the historic downtown.

The proposed zoning code eliminates residential usage in any structure downtown. As written, those dwellings currently inhabited in downtown will be classified as non-conforming, and if they are vacated for more than six months, the allowed usage will revert to a short list of retail, services and office uses. If a property owner wants to use his building for housing, either for himself or as a rental, according to the mayor, he must apply to the planning and zoning commission for a variance or “conditional permit.”

“Why zone out residences?” has been the central question buzzing around town since the ordinance was introduced to the public. Astonishingly, Delhomme insists he doesn’t know who initiated the downtown zoning changes but consistently defends them.

Delhomme says he wants the planning and zoning commission and the city council to be able to question anyone wanting to rent out a downtown dwelling before they are granted a conditional permit. “At least you’re controlling what goes on in your community. I can tell you right now that the apartment business can cause this downtown area some serious problems. You’ve got to be very careful when you’re dealing with that. You just don’t want anybody to come into town and live and cause problems.”

Delhomme cites an incident that occurred about 10 years ago, when two young black men opened a CD shop and recording studio next door to Café Des Amis. Delhomme and Café Des Amis owner Dickie Breaux concur that there was bad blood between the two businesses. Supposedly, customers walking to the café were intimated by the CD shop owners. The police set up extra patrolmen in front of the café, who never observed the intimidation, and subsequently, the CD shop owners left town.

“If we don’t address these type things, in the new ordinance, what happens?” asks Delhomme. “[A property owner] might rent to some young people. They party every night; they’re going to make all kinds of scenes, drugs. The police have to go at night.”

Breaux, however, does not agree with the mayor about restricting mixed use developments downtown. He’s one of a group of downtown residents fighting the ordinance. The group walked out, en masse, of a Feb. 3 planning and zoning commission public hearing, accusing city planning consultant Dr. Dennis Ehrhardt of being “brusque, abrupt, rude, dismissive, abrasive and arrogant.” Ehrhardt was put in the position of chairing the hearing set to discuss residential zoning. He refused to answer questions from downtown residents whose homes were classified as “commercial” in the new ordinance. A second meeting covering commercial districts was slated for Tuesday, Feb. 17 (too late for The Independent’s Monday deadline). Ehrhardt is on retainer to the city to update the zoning document. He has been paid $31,250 to date.

Delhomme faults himself for not attending the Feb. 3 meeting, and by his absence allowing the meeting to erupt into name-calling that culminated in city official Randy “Crip” Cormier commenting, “These people that came in here weren’t born and raised in Breaux Bridge.”

Benoit, who lives downtown, is appalled by the mayor’s stance. “He’s engaging in aggressive, misguided social control through this zoning ordinance. Zoning is to control the integrity of the neighborhood through use. Controlling social misbehavior is in the domain of the police department. Every now and then you’re going to have some undesirable renters. That’s what noise and nuisance ordinances are for. But blowing all the residents out of downtown is like throwing the baby out with the bath water.”

Breaux Bridge’s downtown lists 30 structures on the National Register of Historic Places, and numerous articles have been published holding up the small town’s renaissance as a mecca for tourism. Restaurants, antiques shops and art galleries fill the first floors on Bridge and Main streets; apartments offer downtown living upstairs. Towns like Breaux Bridge are also the model for upscale residential developments, dubbed Traditional Neighborhood Developments, which are touted as antidote to the nihilism of surburbia.

With so much national and local awareness of all the positive aspects of mixed use neighborhoods that Breaux Bridge’s downtown personifies, it came as a shock to downtown residents that they were potentially being zoned out of existence.

Caffery says whoever crafted the downtown section of the proposed ordinance seems to have no recognition of why downtown works. “The thing that I like about Breaux Bridge,” he says, “and the reason I choose to live here, is people know what a good thing is. When there’s something good and beautiful, people want to live in that simple way. Why do you want to kill the goose that laid the golden egg?”

River Ranch developer Robert Daigle and architect Steve Oubre, who brought mixed-use development modeled on downtowns like Breaux Bridge to Lafayette, agree with Caffery. “It would appear that this ordinance totally ignores the fabric, which is Breaux Bridge!,” Oubre told The Advocate. Daigle took it a little further. “In a word, this is crap,” he says.

Delhomme says the townsfolk will have their opportunity to speak out in the public hearing scheduled for the 17th, and he expects changes to be made to the proposed ordinance before anything is adopted by the council. But he is adamant that the downtown residents will not dictate to city government. “I do not want to be like Lafayette, where bars cause problems. This downtown is not for those people [the ones who came and protested at the Feb. 3 hearing]. It’s for all of Breaux Bridge."