The barricades are out, so it must be time for Mardi Gras in Lafayette. 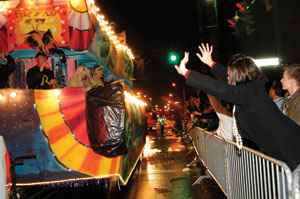 It’s not the big city, and it’s not the country. Lafayette is its own breed of Mardi Gras, full of barricades, RVs, pickup truck floats, street vendors and plenty of food and music everywhere you turn. Le Festival de Mardi Gras a’ Lafayette kicks off over the weekend at Cajundome Field, and on Tuesday evening Clark Field hosts the celebrated Creole Mardi Gras dance and costume contest. Mardi Gras parades, which kicked off with the Krewe of Rio last weekend, pick back up on Friday night and continue through the weekend.

Over at Cajun Field, along with all the rides at Le Festival de Mardi Gras, there are also five days worth of music.

For a map of the parade route through Lafayette a complete list of performances and times, visit swmardigras.com.

And on Mardi Gras day, there’s the inaugural Mardi Gras Bowl Jam at the newly constructed public bowl and ramp park located behind the Goodwill store on Johnston Street. There will be bowl and streets contests as well as free live music provided by Greg Ginn & The Texas Corrugators, The Blessed, Six String Rodeo, and 10-Ton Junkie. Skaters will be out there all day, ripping it up in the new bowl as the parades roll.