Nobody lost their temper last night at a meeting of the Breaux Bridge Planning and Zoning Commission. A packed house gathered to comment on the proposed zoning ordinance, which in its original state would have prohibited residences in the historic downtown. The meeting began with a twenty minute rant by Mayor Jack Dale Delhomme, in which he explained how the ordinance came into being, (it was written by planning consultant Dennis Ehrhardt and city planning director Becky Blanchard), railed at comments made about the ordinance by River Ranch developer Robert Daigle and architect Steve Oubre, (Daigle called the ordinance “crap”), scolded the town’s citizens for walking out on Ehrhardt at a previous zoning meeting, (“When you attack Dr. Ehrhardt, you attack Breaux Bridge and its integrity”), and admitted that neither he, the City Council nor the Planning and Zoning Commission understood the proposed ordinance, (“I don’t understand half of that”). 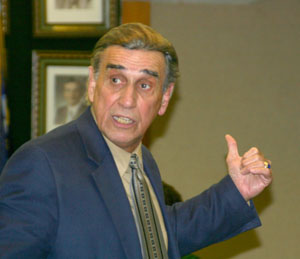 Once Delhomme sat down, the citizenry began addressing the Planning and Zoning Commission with a litany of detailed changes to every element of the document, from the regulation of signs to how much of a setback there should be for buildings downtown. During a two hour, civil exchange, the zoning board and audience found common ground in their desire to preserve the nature of the historic downtown. Describing the document as heavily flawed, City Attorney Chester Cedars joked that he would have been raising hell at the previous meeting along with downtown residents. “This is an opportunity to get it right,” he said, echoed by Delhomme, who pledged “Whatever ya’ll want, we’re here to give it to you.”

Downtown resident Josh Caffery described the tone following the meeting. “There was a rapprochement, a good vibe, a feeling of mutual amity for Breaux Bridge. A lot of the animosity was cleared. I feel that there was a reaching out on the city’s part, and a recognition that we need to make the document conform to reality rather than forcing reality to fit the document.”

Cafe Des Amis owner Dickey Breaux says that the controversy brought out the best in Breaux Bridge residents. “The threat caused all these creative people, who where busy doing their own thing, to come together and imagine what Breaux Bridge could become. By shaking up some complacency, we can start re envisioning our dreams.”