The Blue Note 7 rolls into Lafayette for an evening of jazz. 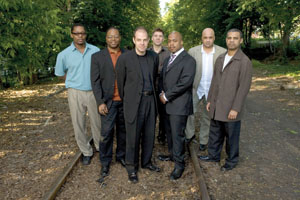 If there ever was a record company that deserves a tribute tour to coincide with its anniversary, Blue Note Records is the obvious candidate. As the jazz label celebrates its 70th anniversary this year, seven of the label’s current artists have come together to record Mosaic: A Celebration of Blue Note Records, an eight-song tribute to a few of the label’s most important artists and to tour and perform the music that echoes and expands the Blue Note legacy.

Bill Charlap, the musical director for Mosaic and the tour of the ensemble (dubbed the Blue Note 7), sums up the impact of the label on the overall jazz in a recent phone interview. “If you imagine a world without the Blue Note catalog as a jazz man, it would be like missing (William) Faulkner and Herman Melville,” he says. “I think it would alter the landscape of recorded jazz history.”

Founded in January 1939 by Alfred Lion and Max Margulis (Francis Wolff joined the team a short time later), Blue Note grew steadily into a jazz force over the next decade, with an early roster that included Thelonious Monk, Bud Powell and Fats Navarro. The label’s focus then shifted from hot jazz to the emerging hard bop style, and during the 1950s and ‘60s, Blue Note stood as perhaps the premier label in jazz. Its roster boasted jazz giants like Art Blakey and his Jazz Messengers, Horace Silver, Lou Donaldson and Jimmy Smith. Greats like Cannonball Adderly, John Coltrane and Miles Davis also briefly recorded for the label before gaining greater acclaim.

Charlap says Blue Note’s artist-friendly philosophy was one of the keys to the success of the label. “One of the testaments to their brilliance is they allowed musicians to be themselves, and they championed these important composers as well, like Horace Silver and Joe Henderson and Wayne Shorter, and Herbie Hancock, McCoy Tyner, Bobby Hutcherson —  all those great composers and players.”

But that all changed after Blue Note’s sale to Liberty Records in 1965. Lion retired in 1967, and Wolff died in 1971. The label slogged on before being absorbed by United Artists and eventually phased out in 1979.

Then in 1984, EMI bought United Artists and revived Blue Note, naming Bruce Lundvall president. The label has grown steadily under Lundvall’s leadership, and over the past decade has gained renewed prestige with the success of artists like Norah Jones, Cassandra Wilson and Dianne Reeves. Meanwhile, established talents, including New Orleans natives Terence Blanchard and Wynton Marsalis, have recently signed to Blue Note, further solidifying its presence in jazz. Today, Blue Note is Capitol Records’ flagship label for jazz, adult pop and classics.

Mosaic and the Blue Note 7 are firmly rooted in that jazz tradition established by Blue Note. Charlap, who is widely recognized as one of the finest pianists in jazz, is joined in the group by Nicholas Payton (another New Orleans native on trumpet), Ravi Coltrane (saxophonist and son of John and Alice Coltrane), Steve Wilson (saxophone and flute), Peter Bernstein (guitar), Peter Washington (bass) and Lewis Nash (drums). And the songs on Mosaic were penned by Blue Note stalwarts like Monk (“Criss Cross”), Herbie Hancock (“Dolphin Dance”), Silver (“The Outlaw”), and Tyner (“Search For Peace”).

“All the arrangers in the band brought new and fresh conceptions to the pieces we’re playing,” Charlap said. “While they retain the essence of the original compositions and conceptions of those pieces, they also have the personalities of the players and finally the personality of the whole band as a unit.” But Mosaic isn’t an attempt to either recreate or relive Blue Note’s classic catalog. “It’s impossible to be comprehensive about any of those artists, let alone the entire Blue Note catalog,” Charlap says. “So finally, [Mosaic] is just a snapshot, and there are many other players who we will represent subsequently on the road and perhaps in a subsequent recording.”

And Charlap adds that Mosaic represents only a portion of the music the Blue Note 7 will perform while on tour. “All you have to do is look at the material we recorded and think what’s not there?” Charlap says, while dropping helpful hints with names like Freddie Hubbard, Wayne Shorter, Dexter Gordon and Bud Powell. “So many artists I can think of ... many other artists we did not represent.”