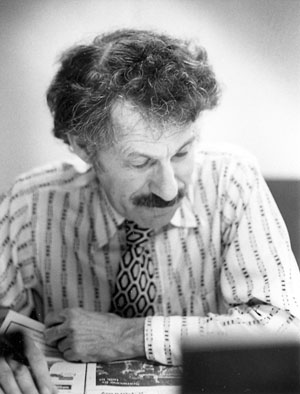 Vincent Marino died Sunday, Feb. 15, at Our Lady of Lourdes. His death certificate no doubt cites a medical condition, some bitter-end malaise of gerontology. But Marino — Vince to many, Doc to many others — was 91. He died of a long life spent well. That’s what did him in. Damn the certificates. And he was one of Lafayette’s last real newspapermen. Journalism is poorer for his passing.

Vince spent more than 50 years as an editor at The Daily Advertiser. Half a century. No one stays that long at one place, save for marriage, without loving it, and he passed on that love to hundreds of writers he mentored. Along the way he was nominated for a Pulitzer Prize, and earned master’s and doctoral degrees at the university now called UL Lafayette, where he also taught for 20 years. His 1978 dissertation was titled, “Creating Conscience through Black Humor: A Study of Kurt Vonnegut’s Novels.” In the ’70s Vonnegut resembled Marino.

Vince was born in New York. His parents were Sicilian immigrants. Shoemakers no less. But the Marino family moved to Franklin when he was 4 years old, and the faint accent that stayed with him was a little Old World and a little Bayou Country.

His sphere was wide, and the writers he encouraged to pursue the story and settle for nothing less, to value accuracy, to love and respect the power of language, they’re sprinkled about, better for his tutelage.

Yet Vince’s geographical sphere, like his physique, was diminutive. Five-seven, 135 wet to the skin and standing on his toes. And he spent the majority of his life right here in Lafayette, though few who met him on the street would have guessed it. There was something exotic about Vince in this land of 10-ounce beers, which he praised; they stay cold to the last drop. But he preferred whiskey. Doc could talk boudin and Baudelaire with equal aplomb. He was dapper but never foppish. His neatly trimmed mustache was a man’s mustache.

Vince was too scrawny to enlist during World War II. Instead, he was drafted into the Army’s communications division, the Signal Corps. He served in the European theatre. The G.I. Bill helped him get his first college degree in journalism at LSU. He returned to Lafayette and landed a job at The Advertiser, where he would remain until 2001. Even today, as this article is written, his name appears with other members of the editorial board on the Op-Ed page.

He trained reporters to be aggressive, to be unflinching, but most of all to be fair — to write with facts that never bury the story, and to write with flair that never suffocates the facts. And for the columnists judged both on choice of word and substance of argument, he bestowed with sleight of hand two gifts: the love of a phrase that surprises and delights, and an aversion to cliché.

It’s hard to write a tribute to Vincent Marino. It cannot surmount the impossibly high outcrop of standards he raised for himself and for his writers.

Clambering for phrases to describe him, one may grasp at “one of a kind” or “one in a million.”

But don’t pretend that grip will hold.

Doc would’ve clicked his tongue at those clichés and run a red mark straight through them.