In the Electric Mist is held over on the big screen. 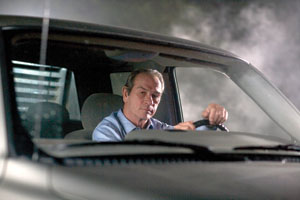 (UPDATE: In the Electric Mist has been held over again at New Iberia's Grand Theatre 10 through March 13.)

What sort of man sees the ghosts of the dead walking among us? Is his mind fueled by alcohol, drugs, or the overwhelming burden of trying to rescue the innocents of society from men who have become monsters? New Iberia’s Edgar Award-winning novelist, James Lee Burke, has created, in detective Dave Robicheaux, a character who cannot rest while evil haunts the swamps of south Louisiana. In novel after novel, Dave’s moral compass guides him through the tangled landscapes and shadowy psyches of those who “hunt on the reservation,” criminals who would exploit the people and the land of Robicheaux’s birth.

No other novel is as explicit in depicting the sins of the past and how they haunt the present as In the Electric Mist with Confederate Dead. French director Bertrand Tavernier brings the novel to life in his newly released film, In the Electric Mist. After a red carpet preview on Feb. 18 in New Iberia, where the film was shot, it was supposed to run for one week, Feb. 19-26. But the response by theatergoers has been so positive that the film, headed straight for DVD, has been held over through Thursday, March 5.

There’s a lot to like about In the Electric Mist. Tavernier spent four months shooting on location in Iberia and St. Martin parishes, and it’s evident he was entranced by the Basin and its surrounding levee roads. The swamps hold secrets for decades and only reveal them when the right person comes along. Clearly Robicheaux, played by Tommy Lee Jones, is that rare person, willing to suspend disbelief, when the ghost of a Confederate general appears to guide him. Gen. John Bell Hood, played by Levon Helm, steadies Robicheaux when the confusion of the mystery he is trying to unravel threatens to overwhelm him. It’s a nice psychological center to a film that at times erupts into gratuitous violence, embodying the nihilism Robicheaux struggles against. Kudos to Tavernier, who gets Burke at his deepest levels, and who, with his light hand and respect for Cajun culture, has made a film to make the locals proud. Not an easy task when it comes to movies made in Louisiana.