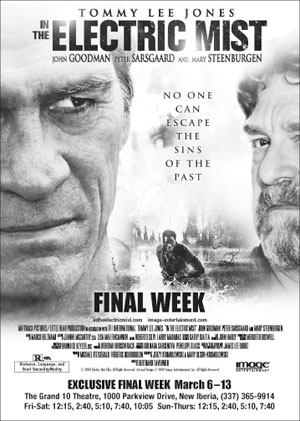 Despite the fact that March 3 was the DVD release date for In the Electric Mist, the film, starring Tommy Lee Jones, is being held over one more week. Based on the James Lee Burke novel In the Electric Mist With Confederate Dead, the film was shot over a four month period in the spring of 2007, on location in New Iberia. At one time slated to be screened at the 2008 Cannes Film Festival, release dates were pushed back for nearly a year, and then co-producer Deborah Dobson Bach announced the independent film would be released straight to DVD. Critics speculated that the film was fatally flawed.

However, when In the Electric Mist opened at the Grand Theatre 10 in New Iberia on Feb. 18, it received rave reviews from locals, who were as involved in friend spotting as they were evaluating the film. Most people said they had to go back to watch the plot unfold. Originally scheduled for a one week run, In the Electric Mist has been held over for a third week, and will finally close on March 13, giving locals a last opportunity to see it on the big screen.