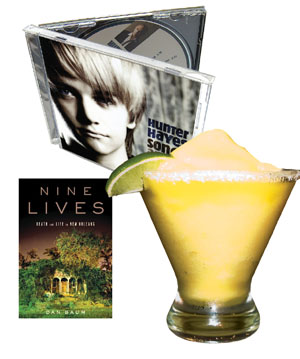 Spring fever
The weather’s been ideal for al fresco dining (though it still boggles the mind that we have so few options here), and while you may not have frozen drinks on your mind just yet, you will soon. Warmer days are just around the corner, and the Boulevard Grille in the Oil Center Gardens is ready to quench your thirst. The Mango Margarita is the perfect balance of sweet and sour — a mango puree, sour mix, tequila and triple sec rimmed with a sugar/salt mix. The house version sells for $5.50, but you can upgrade to top shelf (Jose Cuervo Traditional and Cointreau) for $7 or go all out with the premium (Don Julio Reposado and Grand Marnier) for $9.25. Call Boulevard Grille at 264-1117. — Leslie Turk

Hunter Hayes’ Songs About Nothing
Hunter Hayes done grew up. The accordion playing Acadiana kid you’ve come to know and admire and may have seen in The Apostle or Star Search is now a teenager of 15 with a new CD, Songs About Nothing. Writing eight of the 12 tunes, which range from teen power pop to commercial country, he already has a veteran’s grasp on how to make music that a lot of people might like. Hunter appears at Bach Lunch on Friday, March 13 at Parc San Souci where you can buy his new CD or purchase it at hunterhayes.com . — Dege Legg

NINE LIVES
Dan Baum dazzled us with his coverage of post-Katrina New Orleans. The former writer for the New Yorker moved to the Big Easy four months after the storm, and chronicled his trips, by bicycle, to every nook and cranny of the city. He was there for the first post-storm Mardi Gras, there as pioneering residents of the Ninth Ward returned to rebuild their homes, there to witness the resurgence of crime as gangs began to take over empty houses in Central City. Baum’s blog was a must read while he was filing dispatches for the New Yorker. Now Baum, who lives in Boulder, Colorado, has just published a book telling the story of the city through the eyes of its determined residents. Nine Lives begins with stories that predate the 1965 hurricane, Betsy, the big one that knocked out power for over a week and flooded the Ninth Ward. Encompassing a cross section of lives over the course of 40 years, from Betsy up through Katrina, Baum examines what makes the people and the city of New Orleans the extraordinary place it has always been. Baum’s eye for detail, his ear for language, and his compassionate spirit allow the nine speakers to come to life in a way few writers ever achieve. Nine Lives: Death and Life in New Orleans is available at Barnes and Noble, for $26, or from Amazon.com for $17. — Mary Tutwiler