Suffocation, one of the godfathers of extreme metal, comes to town. 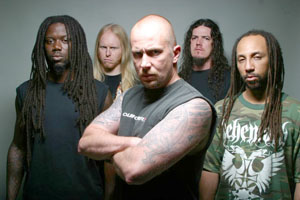 Can’t tell the difference between heavy metal, death metal, black metal, or grindcore? Don’t beat yourself up; not many people outside of the world of all things metal can. Formed in 1990 in New York, Suffocation is recognized as the originator of the “brutal death metal” sub-genre, which fuses old school death metal with speed metal, avant-garde experimentalism, and good old-fashioned Mach 5 down-stroking. In short, it’s heavy, loud, fast, and not the kind of the thing your grandparents will appreciate. Suffocation’s drummer, Mike Smith, is credited with inventing the drum beat that started it all, the “blast beat.” I sat down with Mike to find out how and why he invented it.

What is a Blast Beat? It’s aggressive and driven. And not laid back at all. Both legs and arms are hitting on everything at once on the same rhythm, accenting each kick with each snare hit simultaneously.

How much room is there to swing in there? That depends on how fast you’re playing it. There’s plenty of variation in the cymbal work and tom fills in between, but it goes by pretty quick. But it’s a quick genre of music anyway.

What’s the difference between the blast beat and what Metallica and other metal bands were doing in the ’80s? Metallica was thrash. They had what I call a quick scat beat – more of double bass drum thing. Nowadays you can’t get away with playing just that — the metal fans won’t accept it. They’ll shun you.

What’s the difference between a grind and a blast beat? The grind is an off beat where your high hat and snare are going opposite each other. More like a slap. The blast is all one ... where everything is working at once, together.

How did you come about inventing the blast beat? I didn’t know I was inventing anything new. At the time, death metal was so new that every band in the genre was an original expression of it. The blast beat enhanced our style and suited the music.
**
What types of music were you into growing up?** Iron Maiden, Dio, Black Sabbath, Zeppelin. I come from a musical family where my father was into all forms of music. He was big into record collecting. So I grew up listening to country, jazz, rock, classical, everything.

Death metal has some pretty extreme fans. What kind of crazy stuff have you witnessed at shows? Kids stage diving from the top of the speakers or the rafters – from 2nd floor balconies – all the way down. As high as they can get, they will climb. There’s not a Suffocation show where somebody doesn’t come out of there with something broken. The shows are always crazy—that’s the norm—so if you come looking for anything else you’re in for a surprise.

Being an African-American and playing music in a genre typically populated with aggressive white guys, have you experienced any racial discrimination at shows? I’ve been to Poland, Germany, all across the world and there’s been only one incident – in 18 years – where I experienced any kind of discrimination. It was at a show in Pennsylvania where some skinheads were acting up. It was diffused really quickly. It’s just old fashion ignorance.