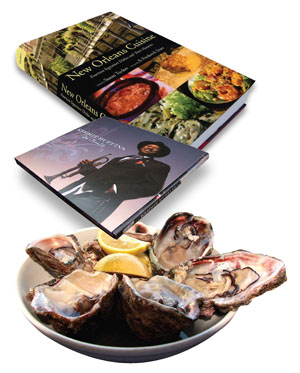 NOT YOUR MAMA’S COOKBOOK
If you ever stop to ponder what makes New Orleans cooking so wonderful rather than just digging in, you might come up with a list similar to the one that comprises the chapters of New Orleans Cuisine: Fourteen Signature Dishes and Their Histories. No, this is not another cookbook about the food of the Crescent City. Edited by Susan Tucker, curator of books and records at the Newcomb Center for Research on Women at Tulane University, this book is a compilation of research and interviews by some of the city’s best food writers, delving into the history and folklore of the famous dishes of New Orleans. Chapters on the city’s signature cocktail, the Sazerac, French bread, Shrimp Remoulade, Oysters Rockefeller, Turtle Soup, Trout Amadine, Mirliton and Shrimp, Creole Cream Cheese and Café Brûlot explore the legendary dishes of the city. This is a cultural history as well as a culinary one, and will become one of the most useful reference books on your shelves, once it migrates from your night stand. For anybody who loves food and New Orleans, this book is a fascinating read. New Orleans Cuisine retails for $28 at local bookstores. — Mary Tutwiler

OYSTERS TO ROCK A FELLA (OR GAL)
It’s March, and as spring gets under way, your days of grabbing a cold beer along with an iced tray of oysters on the half shell are numbered. Before the season ends, Lafayette’s The Tap Room, 201 Settlers Trace Blvd., has you covered when it comes to getting your final bivalve fix. The bar prides itself on keeping a fresh stock, and during happy hour raw oysters are 35 cents a piece, one of the lowest prices in town. Happy hour at The Tap Room runs Monday through Saturday from 4 p.m. to 7 p.m. and also features $1 off any of the bar’s 40 different draft beers. Call 984-9280 for more info. — Nathan Stubbs

KICK IN SOME BRASS
Is there a better name for a backing band than The Barbecue Swingers? There is not, and that was a hypothetical question anyway. New Orleans trumpeter Kermit Ruffins is out with a new record, Livin’ a Tremé Life (Basin Street Records). The disc takes it name from the Crescent City neighborhood where Ruffins came up (as did two other trumpet greats, both named Louis: Armstrong and Prima), and Ruffins’ musical showmanship has “Louis” written all over it. But the disc takes its sound from the whole city, opening with a Dixieland swing and working its way through 11 remaining tracks that shout, “Get yo butt off the stool and onto the dance floor!” Livin’ a Tremé Life features some great musicians from New Orleans’ musical past and present, bassist George Porter Jr. (The Meters) and guitarist June Yamagishi (Papa Grows Funk) among them. These dirty dozen tracks give New Orleans its big AND its easy back. Available for pre-order (April 28 release) for $16.99 on amazon.com. —Walter Pierce