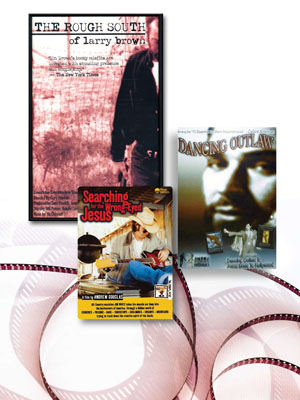 Pat Mire wants you to really see Acadiana. Certainly, he has given audiences a lens through which to peer into the oddities of Cajun culture through films like Anything I Catch: The Handfishing Story. But Mire wants viewers to actually jump through the hoops themselves. So this year, for the 4th Cinema on the Bayou Film Festival, venues will shift all over town, and down to St. Martinville, where the last day of screenings will take place at the restored Teche Theatre.

While Acadiana is the venue, The South is the theme of this year’s festival. Most of the dozen films showing on Saturday at the Southern Roots Culture Documentary Film Series highlight the strange and mysterious place critics dub “The South.”

Take The Rough South of Larry Brown by director Gary Hawkins. Named one of the 13 essential Southern documentaries by the Oxford American, the film is a unique and compelling examination of the life and works of the late Oxford, Miss., fireman-turned-writer Larry Brown, interweaving interviews with Brown and his wife Mary Annie and narrative adaptations of three of his short stories.

Dancing Outlaw, a Louisiana premiere, by filmmaker Jacob Young, features West Virginia native Jesse White, a mountain dancer who tap dances to bluegrass guitar. Described as “one of the most bizarre, upsetting and ultimately inspiring documentaries to have emerged from the South,” the film captures the extreme eccentricity of impoverished Appalachian culture.

In Searching for the Wrong-Eyed Jesus, by filmmaker Andrew Douglas, country singer Jim White takes his white-trash muscle car through a gritty terrain of churches, prisons, truck stops, biker bars and coal mines. Along the way are roadside encounters with present-day musical mavericks, including the Handsome Family, Johnny Dowd, David Eugene Edwards, David Johansen, and old time banjo player Lee Sexton, as well as novelist Harry Crews. And all the while, a strange Southern Jesus looms in the background.

This year, says Mire, he has brought independent film cult classics that have never been shown in Louisiana before. “We’re about art and bringing some sweet class down here.”

• Cinema on the Bayou Film Festival begins Thursday, March 26 at Pack and Paddle. Anything I Catch: The Handfishing Story screens at 6 p.m., followed by The Buffalo Flows. Free admission.

• Friday, March 27, the festival moves to LITE, with introduction of the films to be screened and filmmakers in attendance beginning at 6 p.m. West Nickel Mines Massacre, screens at 6:30 p.m., followed by a Q & A. At 6:30 p.m., there will be a screening of Hot Flash. A reception for the two filmmakers will follow the film screenings. Free admission.

• Saturday, March 28, at Cite des Arts, screenings beginning at 10:30 a.m. with Evangeline. At 11:45, filmmaker Sarah Knight and the festival director, attorney Rebecca Hudsmith, will present a panel discussion on fair use rights for filmmakers. The Southern Roots Culture Documentary Film Series begins at 1 p.m. Saturday. Admission is $3 per film or $10 for a day pass.

• Sunday, March 29, the festival moves to the Teche Theater, Recording Studio and Music Hall in St. Martinville. Tsunami Escape screens at noon. At 12:30 p.m., Hot Flash screens, followed by M for Mississippi at 1:30. Free admission. For a listing of the films in the Southern Roots Culture Documentary Film Series, and detailed information about films and filmmakers, go to the Cinema on the Bayou Web site at www.cinemaonthebayou.com .