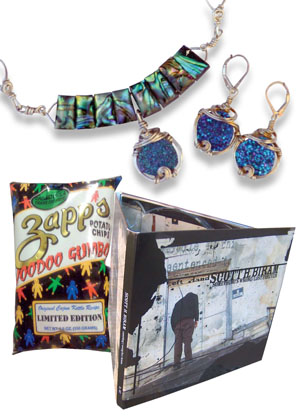 HIDE THE CHIRRENS, BIRAM’S BACK!
Scott H. Biram’s shtick is throwing every limb into the music. But it ain’t a gimmick. This dude’s for real. His maniacal one-man-band performances atop a stomp box at The Blue Moon Saloon in Lafayette are legend. Stand up front and you’ll be sprayed by spit and splayed by fervor. Biram is set to release his third album on Chicago’s Bloodshot Records. And while Something’s Wrong/Lost Forever is a multi-layered affair on several tracks featuring John Wesley Meyers on electric piano and organ, and Van Campbell on drums, as well as Biram overdubbing lead-guitar, it retains the raw appeal of Biram’s live shows, which are at once his bread and butter and his fire and brimstone; blues, country, rockabilly, punk, voice mail — it’s all there. Where Biram lets others in, we get drenched in wet, gauzy sheets of Hammond organ and dollops of Fender Rhodes. But Biram is at his best on spare tracks like “Ain’t it a Shame,” a metronomic Delta blues tune punctuated by that familiar stomping foot and throaty harmonica. The release date for Something’s Wrong/Lost Forever is May 19, but it should be available for pre-order on amazon.com within days. — Walter Pierce

ARTISTIC ALCHEMY
Not only do these earrings from designer Laura Glen really sparkle, but you’ll get to learn a new word to describe them. The glittering blue is dubbed “druzy,” the name for a stone that has been covered with tiny quartz crystals. The crystals form naturally on semiprecious gemstones like agates, and when enhanced with titanium the stones turn a gorgeous blue. Glen dangles a doozy of a druzy from paua shell and then cold forges sterling silver wire to form a necklace. She learned the art of jewelry making from her mother, and has been turning out her baubles for 15 years. Other stones she is drawn to are naturally formed rose quartz, baroque freshwater pearls, blue opals, and turquoise. Necklaces run from $150, earrings are in the $70 range, at Sans Souci Fine Crafts Gallery, 266-7999, or check out Glens’ Web site at www.lauraglen.com . — Mary Tutwiler

EVERYTHING IN THE KITCHEN, ON A CHIP?
March is slowly seeping into April and that means, much to the chagrin of many here in Acadiana and the rest of South Louisiana, gumbo season is winding down. Zapp’s new Voodoo Gumbo limited edition chips ease the pain ... sort of. The winner of a “Name That Flavor Contest” at Zapp’s Annual International Beerfest in Baton Rouge, this “gumbo” is the product of an accidental spilling of a pallet of spices. It turned out to be a good kind of accident, mixing five spices that one Zapp’s employee liked while trying to clean it up.  This mixing created an “everything in the kitchen” flavor, hence the name. Available at most convenient stores and supermarkets. Check out their Web site, www.zapps.com for more information. — Ryan Broussard