Real estate developer Reed Andrus’ vision could be a low-cost solution for expediting the transformation of Lafayette’s biggest eyesore. 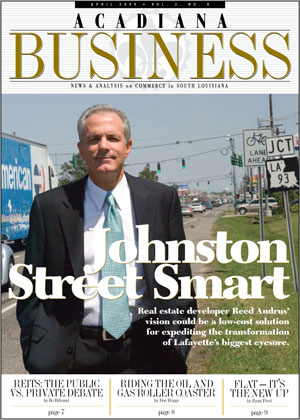 After decades of wishful thinking and years of serious debate that followed the introduction of the Johnston Street Redevelopment Initiative, a viable compromise is emerging to achieve critical aesthetic and functional improvements on the city’s main commercial corridor. It comes from the private sector, and details are available on a Web site that went live March 24 — www.improvejohnston.org . It’s a solution that appears to work because it delivers most of the aesthetic improvements the community would like to see with minimal disruption of business. Its author, commercial real estate developer Reed Andrus, says it could be completed in as little as five years and perhaps cost one-third the original plan. City-Parish President Joey Durel says he’s seen it and is poised to endorse it.

It can be argued that Johnston Street, Lafayette’s busiest thoroughfare, is also Lafayette’s biggest eyesore. Recognizing the road was aging, over-utilized and badly needing a facelift, Lafayette Consolidated Government in 2001 commissioned UL’s Community Design Workshop to produce the Johnston Street Redevelopment Initiative. The initial design phase focused on the segment from University Avenue to Doucet Road and presents a beautiful, lush corridor that features underground utilities, greenscaping, boulevards for aesthetics and mass transit, ample sidewalks and bike paths. It requires a 116-foot right-of-way through some of the oldest sections of Lafayette, where narrow streets were built before development codes existed and rights-of-way are 60-to-80 feet. The price tag for this 2.7-mile segment was estimated at $64 million at the time.

Many hailed the plan as an exciting breakthrough, a must-do for the city, a progressive solution in a critical portion of Lafayette showing the early signs of decay. South College Center owners David and Steve Landry, Judice Inn owner Gerald Judice and service station owner Byron Fournet signed on early. They worked with administration officials to advance the idea and took an active role in the Johnston Street Coordinating Team. But other small business people fought it. They feared the loss of parking — or even a total loss of their buildings — business disruption during construction, additional taxes and front-foot assessments to fund the plan. They were also vehemently opposed to the boulevard concept, concerned it would disrupt more customers because it would take longer to build and would increase traffic congestion (by turning the center turn lane into a median and going from five lanes to four). It was also argued that boulevards impede the ability of emergency vehicles to move through thick traffic. Brother Abdalla of Brother’s on the Boulevard and Dale Savoie of Awardmaster have been visible spokesmen for this point of view.

Andrus, whose family owns several large developments along Johnston Street, attended only a handful of official meetings but followed the process through the media and in personal discussions with the other business people involved. While the issues were hashed out in public, Andrus took note and quietly went to work behind the scenes with a fundamental commitment to aesthetic improvements on a street he knew needed a lot of help. He approached his analysis with a businessman’s eye for the best return on investment. Utilizing the tools of his trade — information technology, graphic design, engineering analysis and expense projection on a commercial scale — Andrus has produced a study and launched a Web site that, collectively, would have cost at least $50,000 had it been contracted. His work is impressive and could provide a badly needed step beyond the impasse that has existed for years. 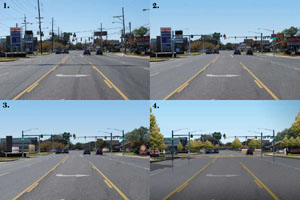 An animated feature on the home page of www.improvejohnston.org runs through the four-phase improvement sequence, starting with the existing view of Johnston Street and South College looking south (Image 1). In image 2, Andrus’ graphics team removes overhead power lines. In image 3, the team substitutes monument signage for existing business signs, and landscaping is added in the final image.

Using aerial photographs, Andrus began his analysis by gauging the impact of cutting a 116-foot wide swath along the thoroughfare. The overlay is published on the Web site and includes a Google map feature to illustrate how individual properties would fare. “When you look at how many buildings would be impacted, it’s staggering to think what the cost of right-of-way acquisition would be,” he says. “There’s the cost of land, the cost of the buildings and business severance payments that would have to be paid. And that doesn’t even take into account the time it would take to negotiate these deals, one by one.”

To Andrus’ business mind, the Johnston Street Redevelopment Initiative’s cost-benefit ratio made no sense based on the right-of-way it required. He began considering alternatives with the assumption that the only options that should be on the table are ones that can be done within the existing Johnston Street right-of-way. This would, according to Andrus, expedite the project’s completion and also hold down cost, which led to the first question: Given existing right-of-way as a parameter, what can be done that would have the highest impact? He started with the elimination of overhead power lines.

On New Year’s Day last year, Andrus came back early from a duck hunting trip to take photos along Johnston. “I figured there would be the least amount of traffic at that time, which is what we needed to get the raw photographs required for the next step,” he explains. He took hundreds of photographs that morning and started the arduous process of eliminating power lines and creosote poles using photo manipulation. The results were astounding. At that point, he attended a meeting of the planning commission for a little show-and-tell. “When I put the images on the big screen, there was a collective gasp from the audience,” he recalls. The simple elimination of overhead utilities allows the sky and existing trees as well as the buildings along Johnston Street to be more visible, which led Andrus to his next revelation: “You instantly realize that when you remove the overhead clutter of power lines, transformers and poles, you really don’t need all those gigantic, expensive signs.”

Later, in subsequent steps, he substituted unsightly traffic signals with newer standard issue suspension poles, like those on Camellia Boulevard. “Nothing fancy,” he notes. Then he replaced existing business signage with monument signs and finally added the essential trees and landscaping. The intriguing results are published on the home page of his Web site, which illustrates the intersection of Johnston Street and South College Drive in an example that uses animation to progress sequentially through the different stages of improvement. The effect is dramatic. Best of all, he says his strategy is doable in the very near term.

To help traffic flow more smoothly on Johnston Street, Andrus suggests deceleration lanes for key shopping destinations and a network of ‘rest stops’ where city buses can pull out of traffic to load and off-load passengers. “They could be landscaped and perhaps even be safer for those who ride the buses,” he adds. He suggests that it could lead to better synchronization of traffic signals and thinks that private property owners would see the value of having such features and cooperate to make land available. “I think any business owner would be happy to cooperate on something that makes it easier for customers to get to their store,” he says.

There are some features of UL’s original redevelopment initiative Andrus feels should be implemented, like the concept of defining different ‘districts’ that utilize unique streetscaping, light fixtures and signage appropriate to the variety of prevailing land use in segments along the street. And in the newer portions of Johnston Street, where ample rights-of-way exist, perhaps boulevards and extra amenities could be introduced. “We can’t think that one size fits all when it comes to Johnston Street,” he says, “and I don’t think that’s all bad. It adds some character to the drive.”

Durel is hopeful Andrus’ plan could settle the often heated dispute over Johnston Street and is ready to explore all the funding options available, including state and federal transportation dollars. Tax Increment Financing districts, commonly called TIFs, and front-foot assessments. Durel also wants to find a funding formula that helps businesses transition to monument signage as quickly as possible. For him, a significant part of the plan’s appeal is the minimal disruption to businesses located along the artery. “As a former business owner, I experienced first-hand what impact road construction can have,” he says. “In regard to this project, I always said I wanted minimal disruption for the small businesses on Johnston Street.”

This proposed compromise will likely be a big disappointment for project purists who aspire only to the bigger vision. The Andrus solution is not perfect, but it clearly succeeds on many key levels and, hopefully, will be a credible entry to the public debate. “All of us along Johnston understand that these improvements will be good for our enterprises,” he adds, “but it’s also about what’s good for the community.”