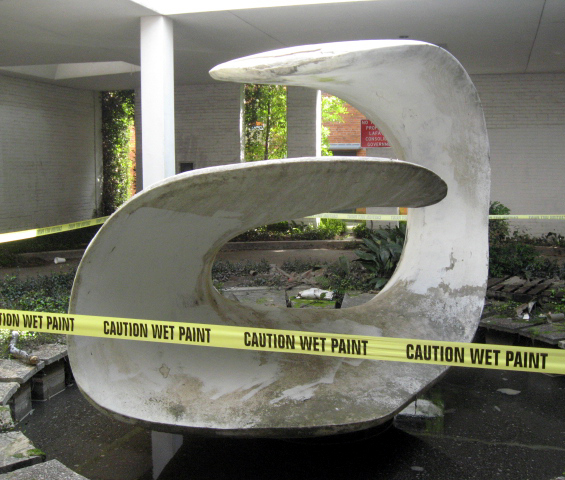 A piece of Lafayette public art with perhaps the least public persona will be saved for posterity and given a more prominent place in the downtown cityscape, thanks to a public-private partnership between the Acadiana Arts Council, Lafayette Consolidated Government, and a Lafayette construction company. The gently twisting slab of concrete once served as the centerpiece fountain in the old Lafayette Building Association bank drive-thru on West Vermilion Street adjacent to the ACA. The dilapidated drive-thru’s days are numbered; it will be razed to make way for a performing-arts theatre connected to the ACA, which will break ground on the facility Thursday.

ACA executive director Gerd Wuestemann has revealed that Lafayette construction firm Lemoine Company has agreed to undertake the rather tedious task of detaching the sculpture from its base and moving it to a new home on the leafy traffic island where Congress Street veers south into downtown between the Iberia Bank Building and the Lafayette Public Library (pictured below). Architect Wayne Domingue from Architects Southwest is providing his services as project manager.

Wuestemann sees the sculpture’s salvation as a model for public-private partnerships in Lafayette’s culture. “What’s happened here, just for this little-bitty sculpture-moving thing,” he says, “it means that we as the arts center said, ‘We will not have this thing destroyed.’ That was the commitment we made... Then we worked with the city, who said, ‘We are willing to commit our human resources to explore housing this on our land...’ And then it took a corporate leader, a company, to say, ‘Ok, well we’re going to play with it also, we’re going to support this and donate our manpower as well.’ And I really think that’s where the future of this city lies.” 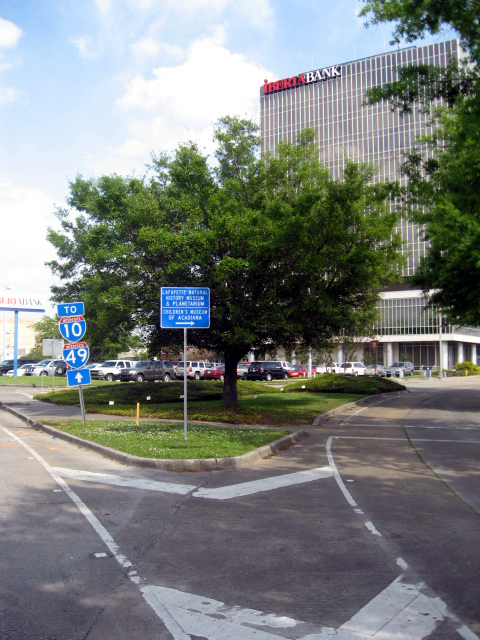 Many details on the sculpture’s transplant remain, including underground utilities at the sculpture’s new home, as well as refurbishing the piece, which has been exposed to the weather for decades. The project's timeline also remains somewhat vague. But Wuestemann hopes the sculpture will be in place on a new base by sometime this summer. “Since we don’t want this to sit in storage forever,” he says, “I would think we could see this done in the next two or three months to come.”

The piece’s creator, sculptor Robert Wiggs, was a UL Lafayette art professor perhaps best known for his discovery of what he called the “twist octahedron,” or the ninth self all-space-filling polyhedron, putting him in good company with Lord Kelvin, Buckminster Fuller, Keith Critchlow, and the ancient Greeks, who discovered the previous eight. Think about that when you drive by it sometime in the near future.