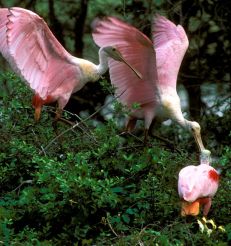 A much anticipated boardwalk that zig-zags deep into the wading bird rookery at Lake Martin has opened for visitors. Built by the Nature Conservancy, it is the first leg of a larger project to construct a visitor center and office for Cypress Island Preserve, which includes hardwood bottomland near the lake as well as the rookery. While the visitor and education center should begin construction in about six months, the 800-foot-long boardwalk already brings birders within such close range of the nesting egrets, herons and spoonbills that chicks can be seen with the unaided eye.

Three years ago, during nesting season, the entire bird population lifted one night, abandoning nests with eggs, and disappeared. The disappearance fueled a lot of speculation, but has never been explained. This year, for the first time since 2006, the birds are back in numbers.

Sunday, I saw great and little blue herons, brilliant pink and scarlet roseate spoonbills, great, snowy and cattle egrets all in mating plumage, as well as anhingas and cormorants roosting in the cypress trees. Snapping turtles and alligators were out sunning on logs. The warbler migration has begun as well. Look for yellow rumps and kingbirds. Buntings and orioles should be arriving any day now. Walking around the levee, three snakes crossed my path. Two were striped garter snakes, the third was a sluggish cottonmouth. Some fear snakes as a sign of evil. Others see them as portents of transformative change. If the repopulation of the rookery is any indication, I’ll go with the symbolism of shedding skin indicating new life, and stop jumping every time I see a snake.