The Independent Weekly's investigative reporting was the nail in the coffin for the questionable deal to swap UL's Horse Farm for Lafayette attorney Jimmy Davidson's Girard Park Drive property. Now a new deal has emerged that will save the pristine land for use by the entire community 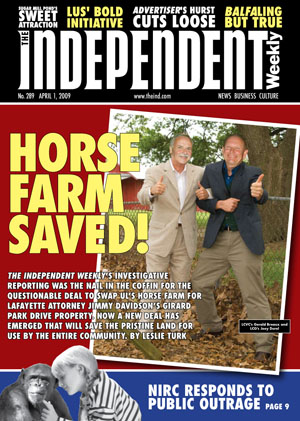 The cloud of controversy over UL's Horse Farm has finally been lifted. An eleventh hour landmark deal struck last night at midnight to save the UL Horse Farm envisions a global tourist attraction and partners Lafayette Consolidated Government with a group of foreign investors.

In a move designed to bring international tourism status to the Hub City, City-Parish President Joey Durel has cut a deal with the deepest pockets in global finance to save what many believe to be "the crown jewel of Lafayette."

The deal, which Durel secretly leaked to The Independent several months ago - with a guarantee that we would not publish any details until it had been inked - also involves American business magnate Donald Trump.

Trump was vacationing at the Dubai island resort, The World, when he bumped into Saudi prince Bandar bin Sultan. Four hours later, after a prolonged game of Texas Hold'em, the two were business partners.

"I've been looking at doing a deal in Louisiana for some time," says Trump, noting his preference had been to construct a Trump Tower in the New Orleans Business District. Apparently, however, the prince had his eye on the Hub City, home to his alma mater. Reached on his cell phone while elephant hunting in Tanzania, bin Sultan says, "I remember fondly my days as an undergraduate at USL." A student in mud engineering, bin Sultan spent quite a few hours at The Bulldog, where he befriended then head chef Joey Beyt, who now owns Joey's on Bertrand. "We always talked about how we wanted to bring Riyadh-style entertainment to Lafayette," says the prince.

The Horse Farm deal brings together The Donald, bin Sultan, Joey and Joey in a complex pubic-private partnership to re-develop the Horse Farm property into a state-of-the-art theme park. (Lucifer E. Beelzebub, a new associate of Trump Towers Inc., also has a minority interest in the development.) 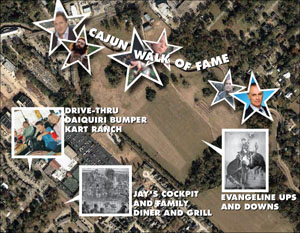 Trump says the theme park, which will showcase rural Cajun culture while at the same time catering to globetrotting trend-setters, is tailor-made for Lafayette. The park is tentatively titled CoonAsstreauxworld. "Nowhere else will you be able to chow down on Beluga caviar, gas up your Hummer at a truck stop with a caged tiger, imbibe at a French-speaking wine tasting and watch blood-thirsty roosters fight to the death all in one place," says Trump.

Durel says CoonAsstreauxworld will be the kind of economic and cultural engine that lures the creative class, the term coined by Sally Jessy Raphael red-rimmed-eye-glass wearing author Richard Florida, to Lafayette. "This is the kind of game-changer project that will finally keep cool people from wanting to leave town," he says.

As for complaints from neighbors in the Super Greenbriar subdivision surrounding the theme park, Durel says those fat cats can move if they don't like roller coasters and screaming kids who are just out to have a good time. "Get, or be gone," he says. "In fact, just get gone. We did it on Camellia, we can do it here. Then, boom! Park expanded." Durel also is anticipating that the Save the Horse Farm community group, whom he refers to as "unrealistic tree huggers," will not be pleased with the deal he struck. "Their desire to preserve the space as a 'green space' for Lafayette was just a spacey pipe dream," the mayor says, putting two fingers to his lips and making a loud sucking sound.

Save the Horse Farm members could not be reached for comment.

Lafayette Convention and Visitors Commission Director Gerald Breaux calls the development, "a win-win-win-win." Breaux imagines CoonAsstreauxworld as a place visitors will never want to leave. "This park is really going to transport people into a fantasy world beyond their wildest dreams," he says.

Details are still a bit sketchy, but an initial list of park attractions gives a glimpse into the enormity of the project. First stop at CoonAsstreauxworld: a Hollywood-boulevard style Cajun Walk of Fame that plans to honor such local big screen stars as Armand Assante (Belizaire the Cajun), Keith Carradine (Southern Comfort), Bo from Survivor and Krista from Big Brother 2.

Guests can also watch yardbird gladiators in action at Jay's Cockpit and Family Diner and Grill. You won't know which rooster to cheer for, the champion or the loser, which becomes your dinner. Coco vin anyone? If you're still in the sporting mood, visit the neighboring Evangeline Ups and Downs truckstop casino and bushtrack.

Experience all the fun of drinking and driving with no consequences at the Drive Thru daiquiri bumper kart ranch. For a more sobering experience, linger at the memorial to fallen fighting roosters. Thrill-seekers can go tubing down the Deliverance-themed swamp ride, The Bayou's Revenge.

CoonAsstreauxworld will also house the world's largest Cajun food pavilion, as envisioned by Joey Beyt. "It's been my biggest food dream," he says. "Eat your heart out Alice Waters." The pavilion plans to revolutionize Cajun cuisine with pioneering menu items like Truffle-laced lard with fried pig's ears, Nutria-head cheese and alligator and squirrel ice cream swirl.

"Guests are going to come for the alligator ice cream and stay for the open heart surgery," says an ecstatic Breaux. "It's going to be a life-changing experience."