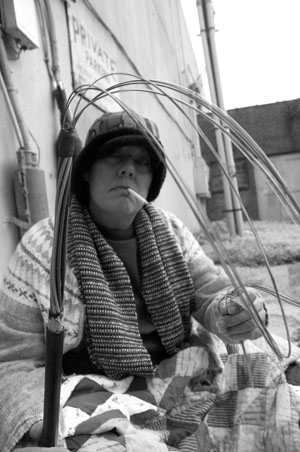 “Rita” gets her fiber on.

In a move instantly hailed as both a social and technological breakthrough, City-Parish President Joey Durel announced Monday that Lafayette plans to follow up its popular fiber-to-the-home project — which opened for business last month — with a new initiative aimed at delivering high-speed fiber optics to the city’s most marginal population.

Speaking at a private City Club luncheon with local business leaders, Durel was joined by Lafayette Utilities System Director Terry Huval and Acadiana Outreach Director Valerie Keller, both of whom expressed their enthusiastic support for the Fiber to the Homeless initiative, noting that the program would put Lafayette on the vanguard of addressing the digital divide, the technology gap that exists between the haves and the have-nots.

“When Joey first brought this idea to me, I wasn’t quite sure how it would work,” said Huval. “Then I realized that this is such a pioneering idea, we can’t afford not to do it.” Huval said Lafayette is the first city in the world to propose a municipal Fiber to the Homeless network. “Silicon Bayou in the house y’all,” Huval exclaimed, raising his hands to the roof.

“This will truly give wings to a dream,” expressed Keller, “and change the way we look at our residence-challenged population.” Keller then brought up Joe Bob Frere, a local homeless man who recently sought assistance through Acadiana Outreach. Frere said he has been living on and off the streets in the Lafayette area for the past four years. “Really what I’d like is a good hot meal and a roof over my head, and beer,” he said. “But fiber is the next best thing, right?” he added, shrugging his shoulders. “I guess I’ll use mine to tie my stuff together.”

Durel noted that anyone who says they know what kind of innovations will come out of this initiative is lying. That, he says, is what makes it so innovative. “What is a homeless person with no home electronics, very limited means, and little to no technological know-how going to do with a state-of-the-art telecommunications wire capable of delivering an infinite amount of information at the speed of light?” Durel asked. “I have no friggin’ idea. But my friends, we’re about to find out. And once we do, we can say, ‘you saw it here first.’”

Huval said the Fiber to the Homeless initiative will involve a five-phase roll out over the next two years, eventually offering fiber to every indigent individual within the city limits. Over the next year, fiber will be delivered throughout the first three phases, which includes the I-10 and I-49 corridors, downtown and the Pinhook bridge. Phases IV and V, to be completed by the end of 2010, include the back of the Evangeline Thruway Walmart and more remote camps along Ambassador Caffery and Louisiana Avenue. Street maps of the five phases are available on Lafayette Consolidated Government’s Web site.

While many of the program’s details are yet to be finalized, Huval says the city is working on innovative ways in which to be able to sell service to the homeless. Like Fiber to the Home, Huval says the business will offer different tiers of service, but stresses it will likely be even more flexible.

“It may be that some [homeless people] just want to have the cable to hold, without necessarily having any service running to it,” Huval says. “Obviously, we wouldn’t need to charge as much for that.”

Huval adds LUS is also working on an innovative credit program whereby the homeless could potentially play music or panhandle for service “in much the same way that they beg for change on the street.”

Audience members at the luncheon lauded the announcement of the fiber-to-the-homeless initiative as “freakishly fresh” and “redonkulously bold.”

“This is some serious futuristic, year 3000 type stuff,” said Bill Fenstermaker, president and CEO of Fenstermaker & Associates. “What’s [Durel] going to come out with next, a flying car?”

Durel smiled and pointed back to Fenstermaker, “You know I’m working on it, baby,” he said.

Durel says the fiber-to-the-homeless idea came to him while sitting in his bath one evening meditating on a homeless man who had approached him earlier that day asking for a handout. “I thought,” Durel recalls, “what does this man need in order to be successful in a global, hyper-competitive, 21st-century job market? That’s when it came to me,” he says. “Fiber. What else?”