Christine Balfa is at the forefront of American pop culture with a mammoth new record deal and a year-long world tour. Just her and her triangle. 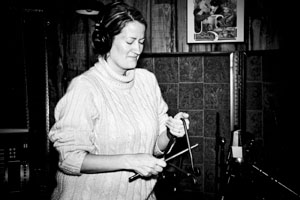 It's so simple and yet so complex, so local and yet so foreign, so sublime and yet so irritating, that it's all just pure genius.

Christine Balfa's latest CD, Plays the Triangle would have been a tough sell in any market - an album that features over 45 minutes of Cajun music, 13 tracks in all, performed on nothing but a triangle. But Balfa's got the mad triangle skills to pay those musical bills.

About 33 minutes into listening Plays the Triangle, your brain freezes up, you forget who and where you are, and you question whether you've been subjected to the same song over and over again. Then your mind wonders into a happy place filled with cotton candy, rainbows, unicorns and Smurfs before your thoughts are derailed and take a detour straight into les flammes d'enfer. Seven hours after listening to Plays the Triangle, your hearing returns to normal, your vision clears up, that rash disappears, and you feel - strangely enough - both refreshed and violated.

Joshua Clegg Caffery - a Breaux Bridge man, a prolific writer of letters to newspaper editors, an all-around champion of the little people, and an expert on local stuff and things - says the CD should have been nominated for a Grammy Award. "It's breathtaking," he adds, as he wipes away a tear from his cheek.

But Caffery's not the only one who's falling in love with the t-fer all over again. Just two weeks after the album's release last year, it skyrocketed to the top of Billboard's Hot 100 chart, where it remained for 13 weeks. Then came the massive record deal from Universal Music Group - the owner of all of the music in the universe - for three more albums within the next year. And you guessed it: They will all feature Balfa's trademark solo triangle musical style.

Balfa was unavailable for comment as of press time. Balfa's husband, Dirk Powell, another local expert, says she is currently "woodshedding" for her upcoming year-long world tour. Powell readily admits that the year-long tour will be difficult for their family, but adds that it's all about exposing the rest of the world to the triangle. "This isn't about who's Cajun or who's Creole, or who can play the triangle or not," says Powell. "It's about putting all of our preconceived notions of the triangle to rest and coming at this with open ears. This is good for all of us, as Americans. We've got to come together. Right now. Over me."

But the Unsung Hero Award for this record must go to Chas Justus (aka Chaz Justice.)

Inside sources indicate that Justus, while in a drunken stupor at a boucherie, purportedly declared, "You know what y'all ought to do?" When no one answered, he continued. "Y'all ought to put out a CD of solo triangle music."

The alleged response of recording engineer Joel Savoy was, "That's not a bad idea." And Savoy knew that Balfa, with her triangle prowess, was the perfect candidate for the gig. After two months of recording over 1,000 songs, there were countless hours of listening, editing and mastering until the perfect 13 songs were selected. "It was maddening, I tell you," says Justus. "Just sheer madness."

But Justus sums up his true feelings about the project on the CD's liner notes: "Working with Christine on this record was effortless. Any artistic direction I could have given would have just gotten in the way of her purely simple yet nuanced style. Her playing transcends genre, stripping away superficiality and reaching directly to the core. It's playful, emotional and at times cathartic. Let her take you on a journey of musical discovery that channels the old masters yet remains innovative and uniquely Christine."