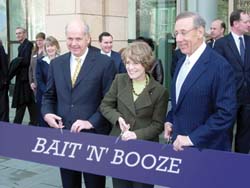 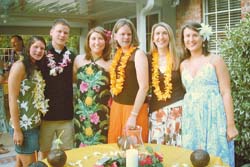 The Landry sextuplets traveled all the way from Whiteville to celebrate the grand opening of Bait ‘n’ Booze. 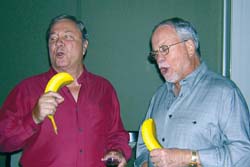 Ron Gomez and friend celebrate the grand opening with bananas.

Gladdened by the prospect of bait and alcohol in one easy stop, broadcaster David D’Aquin makes a banana hat.

The Billeaud family has outdone themselves again! And this time, they’re putting the “tradition” back into traditional neighborhood developments. Last week, everybody who’s somebody (and a couple of people who aren’t) gathered in River Ranch to welcome the hottest new boutique concept around — Billeaud’s Bait ‘n’ Booze. It’s the only drive-thru liquor store and bait shop in Acadiana, or in the world for that matter. Now you don’t even have to leave your Hummer on your way to the new public boat launch on the Vermilion River, located just under the Camellia Boulevard bridge.

“It’s every angler’s dream,” says Robert Daigle, River Ranch’s self-annointed poobah. “It’s what fishing should be about, exerting as little energy as possible, while consuming alcoholic beverages. I’m just glad we can bring this new dimension to our philosophical lifestyle here in the village.”

The worms were wiggling and the good times were jiggling! Guests were also treated to a dinner of boudin balls and cracklins from Tiny Prudhomme’s House of Meats in Broussard. Party-goers whetted their whistles with frosty cans of Schlitz and Natural Light, while they pursued the shop’s selection of tackle — reels, rods, lures, nets, and yo-yos — and their fine selection of malt liquors like the Schlitz Malt Liquor Bull, Olde English 800, and Haffenfeffer Private Stock, “the malt liquor with the imported taste.” But the party really got started when they broke out the Champale. Heeeey! And it just wouldn’t have been a true south Louisiana party without the stylistic musical renderings of Nik-L Beer, everybody’s favorite party band.

Conveniently located where Town Square once was, Billeaud’s Bait ‘n’ Booze makes it easier now to gear up for fishing without the hassle of having to step out of your ride. And best of all, since River Ranch is its own country with its own laws, you can crack the top on your 40 and get your drink on while cruising to the boat launch without having to worry about those pesky Lafayette police.

Billeaud’s Bait ‘n’ Booze is the crown jewel for Architect Steve Oubre. “It’s hard to sell a bait shop and drive-thru liquor store in the middle of an affluent community,” he said. “But I knew if given time, the upper crust here would realize that the notion of a town square was so 2004. And Bait ‘n’ Booze is the perfect example of what we’re really talking about when we talk about mixed-used developments. I’m just glad Lafayette is finally coming around to my innovative way of thinking. My master plan will soon come to pass.”

“Très cool,” said Richard Florida, the hippest man on the face of the planet. “This innovative shopping and drinking experience will surely propel Lafayette to the top of every What’s Cool list published in America. In fact, Lafayette has me rethinking my three “T” formula for a city’s success. It’s no longer technology, talent and tolerance. I’m leaning towards the three Bs — bait, boudin and bourré!”

Lafayette City-Parish President Joey Durel was also on hand to enjoy the festivities and was even spotted cutting the rug to a spirited rendition of “Mustang Sally.” He said, “I’m just glad that the people who live here in this neighborhood, which has been traditionally developed, appreciate the beauty of homegrown worms and crickets, and also enjoy a frosty beverage every now and then, and that the citizens of Lafayette like to dip their poles in the water. It’s that joie de vivre that Gerald Breaux is always rattling on and on about. It’s just further proof that Lafayette has more geniuses per capita than any other city in the world.”