For the last three years, every Friday afternoon in front of the federal courthouse, a small group quietly protests the war in Iraq. 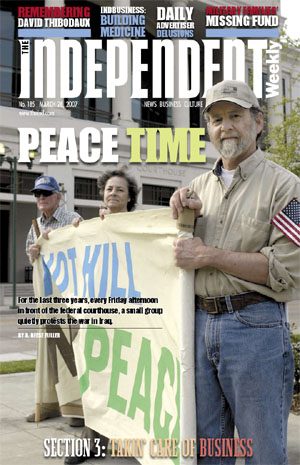 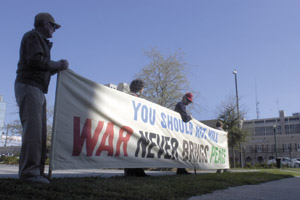 It's an hour before quitting time on a Friday in March, a beautiful spring afternoon in Lafayette. There's not a cloud in the sky. The sun's out and shining. The azaleas are in full bloom. A slow breeze blows, and the occasional sweet scent of citrus blossoms rides on the wind. The pull of the weekend is palpable.

Across the street from the federal courthouse on Lafayette Street in downtown, seven people stroll down the sidewalk, under the gaze of the blindfolded eyes overlooking the steps that lead to the halls of justice.

They reach the corner of Putnam Park and unfurl a banner so long that two people hold it up on both ends with poles attached to it, while a third holds another pole in the middle to keep it from sagging. Facing the courthouse and a meandering security guard, the banner reads: "You Should Not Kill. War Never Brings Peace." A woman with a box in her arms crosses the street and says to the group, "It's like deja vu, every Friday."

For the last three years, the small group has gathered at the same spot every Friday afternoon at 4 p.m. for an hour, holding up its sign and making its silent protest against war.

Vic Hummert and his wife, Roselyn Hebert-Hummert, staged their first vigil on Good Friday in 2004, a year into the Iraq war. There wasn't a big banner then or even a crowd, just the two of them with small signs that said: "War is not the answer." The 69-year-old Hummert served as a Catholic priest for 30 years but resigned in protest of the church's refusal to ordain women. He's now a chaplain at the Lafayette Parish Correctional Center, and his wife serves as a chaplain at Lafayette General Medical Center.

The group averages half a dozen people every week, as part of the national Catholic nonviolent organization Pax Christi USA. "There's not a lot of traffic there, but we're speaking to the federal government," Hummert says. "The federal government has gotten us involved in endless wars. If we stand out here with our little sign, it's a silent vigil and we're saying we reject this policy of war and killing. This isn't a political stance. This is a spiritual stance."

Don't tell Pax Christi USA's Johnny Zokovitch that freedom isn't free or that war protects liberty. "We simply don't believe that," he says in a phone interview. Zokovitch serves as the communication director of the 25,000-member national group. "We've seen that whether it's Gandhi's India or whether it's Mandela's South Africa, whether it's the Civil Rights Movement here in the United States, nonviolence can transform society without war. So while there's always going to be conflict, we don't believe that conflict necessarily has to be violent conflict."

Zokovitch says the small Lafayette contingency is one of about 350 that stages similar protests across the nation in opposition to the war in Iraq. "We've been in line with the mainstream Catholic Church, when the Vatican ' from the very earliest overtures of the Bush administration about a war against Iraq ' called it immoral and unjust," he says. "We've been in that same line of thinking, protesting and acting about it ever since then."

Hebert-Hummert says the idea behind the couple's weekly vigil was simple. "We wanted to be a peaceful presence to encourage people to look at the truth as to what's happening," she says. "We feel this is one way we can be in solidarity with the rest of America who feel the same way about this war. The gospel message that Jesus brought was peace, not violence, with our brothers and sisters throughout the world."

Clarence Craddock stands at one end of the banner, holding it up with a pole. The 83-year-old bricklayer served as a Marine in the Pacific during World War II. His blue cap reads, "The older I get the better I look. I must be approaching magnificent." He says during his military service, "I was anti-war long before the war was over." He describes his war experience as "a terrible destruction and a squandering of our wealth."

A car drives by and honks, and Craddock waves.

Haywood Martin, a retired state employee who has participated for the last two years, holds the pole in the middle of the banner. "I want to continue to send the message to people and to our government that we believe there's a better way than war," he says. "We're not just against the war in Iraq, but war in general. Our basic premise is that war is wrong." Martin concedes that there are situations where nations need to defend themselves, but the current war in Iraq isn't one of those situations. "We should seek peaceful means for redressing our grievances. This administration chose to act without a mandate from the United Nations or the American people and proceeded on the basis of phony information."

"It's time to bring the troops back home," Jeffrey Landry Jr. says. He wears a purple T-shirt that reads "Paul Breaux Middle School" and two strands of Mardi Gras beads. He says his slave name is Landry, but everyone calls him "Bunny." He also says he's a Vietnam vet, and that he's originally not from here, that he's an alien from Pluto who now calls Lafayette home. He just wants to bring the troops home and to investigate Bush and Rumsfeld and Rice and Cheney and Halliburton and Blackwater.

Hummert chimes in: "We're not here to overthrow the government."

"I'm only speaking for myself," Landry says.

A man at the other end of the banner says, "I'm not out here for a political statement or as a radical pacifist." He wears dark aviator shades and a baseball cap with an embroidered image of jet and the words: "F-14 Tomcat." He won't give his name but gives his opinion freely. "I was proud to serve my country and still am. I'm not a Jane Fonda. I'm not sticking my head in the sand. I don't want to prolong anyone's misery. We're really in a catch-22 now. Young people who are sent off to die in old men's wars is a truism, and I don't have an answer."

Will Brickley drives in at least once a month from his home in Lottie in Pointe Coupee Parish. He comes to protest the Bush administration's policies and the Iraq war in particular. "That war was a mistake," he says, "and I could see that from the beginning. A lot of people oppose the war, and so few people are standing up to be accounted. This is a nonviolent protest to let people know publicly and visibly that it's not right, and there are solutions to the problems we have."

Another car drives by and honks. Everyone on the line waves.

"Rarely do we get the bird," Hummert says. "Last week, we had a guy driving by in a big suburban; he gave us a thumbs down. Oddly enough, if we get the finger or the thumbs down, it comes from some fat guy in an SUV," he says with a laugh. "But we've had good support. A lot of horn-honking. A lot of people walk by and stop. A federal judge, who will go unmentioned, walked out of that building and he said quietly, 'I want you to know that I agree with you guys,' and he kept on walking. His wife was there too and she said, 'I agree with you, too.'"

But one individual in particular disagreed with the group so vehemently that he staged his own protest for a couple of months. Hummert says the group only knew the man as Will. He never gave his name, but on one occasion two women who accompanied him referred to him by his first name. He claimed to be an ex-Vietnam vet with a son fighting in Iraq. He would stand on the corner, dressed in a cavalry hat trimmed with a small gold lariat around the brim and a large sign that read "Traitors," with an arrow pointing to the group.

"He stood out there on the edge of the street and almost stopped traffic, pointing to us as traitors," Hummert says. "He harassed us terribly. He would get in our faces and insult us." The 82-year-old Craddock had the most difficulty retaining his composure. Hummert says he had to remind Craddock that the event was a nonviolent vigil and that Will simply had to be ignored. "He would just get right in Clarence's face and insult him," Hummert says. "It was very difficult for Clarence to keep quiet and to stop from swinging at him. Even though he's 82 years old, he's still active."

Will soon turned his attention to Hummert and accused him of molesting boys during his priesthood. "Well, with that, I had a hard time keeping quiet," Hummert says, "but I just stood there. That was a really tough time." After the police showed up on one occasion, Will hasn't been around for the last month.

But has there been any productive dialogue with individuals who support the war in Iraq? "I don't know," Hummert says. "It's hard to say." Then what's to be accomplished by keeping a weekly appointment to hold up a banner and wave at passing cars? "We're probably not going to accomplish anything," Hummert says. "We're just expressing our own opposition to killing. Have you ever heard of A.J. Muste? He was one of the fathers of the peace movement. He was standing out in New York opposing the First World War, and someone came up to him and asked, 'Do you think you're going to stop this war, you silly old man?'

"'Then why are you out here with your sign opposing the war?'

"He said, 'If I don't stand out here in opposition to the war, then I'm going to begin to think like they do.'

"That's basically why I'm here. I just have to stand out here, that's all. I'm not going to stop the war."

An hour has already passed, so the men carefully roll up their banner. They all then form a small circle, hold hands and bow their heads. Hebert-Hummert sighs deeply and leads them all in prayer, remembering the American soldiers who have fallen during the war, who continue to fight the war, the Iraq citizens who have fallen and who are living through the war. As she prays, Brinkley interjects whenever he feels the need: "Oh, yes, Lord. Yes."