C’EST BON
Coming soon, a theatre near you. The Acadiana Center for the Arts broke ground last week on a 300-seat theatre that will one day serve one of the most under-represented aspects of performing arts in Acadiana: good, old-fashioned acting on a stage. Thespians are beside themselves, and stage left, and stage center. But the space, which will be outfitted with movable seating, state of the art sound, lighting and air-conditioning systems and world-class acoustics, will be a multi-purpose building. The ACA envisions the theatre also serving as a hub for children’s workshops, for cultural-arts classes, and as a space for outside performing arts groups to bring their work to Acadiana.

PAS BON
To perhaps ensure there will be no arts groups to offer performances in the new ACA theatre, Gov. Bobby Jindal’s administration proposed a drastic slash-and-burn approach to the arts recently: No funding for you! In fairness, PiyushCo only wants to cut Decentralized Arts Funding by 83 percent. That funding goes to such idle pursuits as cultural programs for children and the elderly, festivals, and parks and recreation programs in rural parishes. If approved, the funding cut could be a coup de grace for arts councils across the state, and for locals like PASA, Acting Up in Acadiana, Vermilionville, and hundreds of similar groups statewide. Forget that Louisiana’s cultural economy is the second biggest economic engine behind energy production. And what of the hundreds of thousands of tourists who flock to Louisiana each year for our culture, and part with their dollars in our hotels, our restaurants, our retail stores? 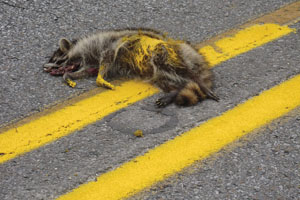 COUILLON
Sometimes government, human nature and the danger of getting to the other side of the road collide in a spectacular, jaw-dropping, stomach-turning display of OMG. The particle collider in this case is a photo published recently in The Courier, Houma’s daily newspaper. We know, it’s too late to warn you to look away, so take it in. Yes, that’s raccoon roadkill and, yes, it’s been striped over. Striped over! The Courier launched an investigation to get to the bottom of poor Rocky’s fashion faux pas and discovered this week’s couillon, the state Department of Transporation and Development. Turns out, according to a DOTD spokesman who fessed up to a Courier reporter, the agency, in an effort to become “more efficient” (read: cheaper) pared down its road-striping units from three vehicles to two. Previously, the first vehicle was there for the express and unenviable purpose of clearing the roadway for the second vehicle, which applied the stripe. Now, the second vehicle does the roadkill removal (or lack thereof) and the striping. Said the DOTD guy, “Sometimes after a long day they forget.