A local dentist is part of an elite group of doctors using computer technology to successfully diagnose and treat TMJ sufferers. 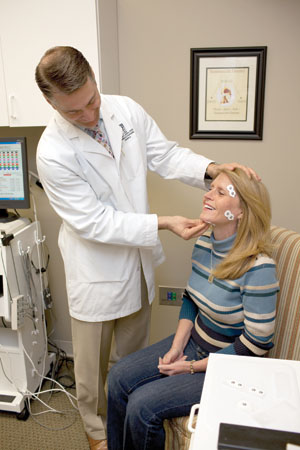 Having pulsating migraines and nothing the doctors are doing or prescribing is working?

Neck and back pain keeping you up at night and all the massages in the world don’t help?

Experiencing a nagging ringing or popping in your inner ear and your ENT hasn’t been able to give you relief?

You might very well be suffering from TMJ, or temporomandibular joint syndrome.

Dr. Craig S. Landry might be able to help you with that.

Landry, an Abbeville native and UL Lafayette graduate, is one of only three or four doctors in Louisiana practicing neuromuscular dentistry, which uses a plethora of factors and computer programs to diagnose TMJ. Landry began his general dentistry practice after completing his residency at Charity Hospital in New Orleans and started treating TMJ 10 years ago after graduating from the Las Vegas Institute, one of the premier dental learning centers in the country.

In the early days of treating TMJ, he had no computerized equipment, but five years ago that all changed when he began using advanced technology to treat the disorder. “The basic difference between what we do now versus then is the neuromuscular dentistry takes into consideration the joint, the TMJ, the muscles that operate the TMJ and the teeth and treat it as one unit with the use of computerized technology,” Landry says. According to Landry, when the jaw is not properly aligned, it puts a strain on the temporalis and masseter muscles on each side of the jaw. Those muscles work harder if the jaw does not set properly, straining them beyond what they normally handle, which can lead to a litany of problems.

Patients visiting Landry for the first time are required to fill out an eight-page medical history questionnaire, which also includes family and pain history. Patients circle where it hurts on a skeletal drawing. He checks the bite, range of motion and takes an X-ray of the head. After the consultation, Landry decides whether he thinks he can help the patient.

If yes, then they come back for a three-hour visit where they begin the treatment, using Transcutanious Electronic Nerve Stimulation, or TENS, to relax the muscles and take additional X-rays.

The patient is hooked up to a computer and Landry has her open and close her jaw. The sensors connected to various points on the patient’s face measure the strain of the muscles and figure out where the jaw would rest comfortably based on the data gathered from the temporalis and masseter muscles, along with other indicators.

At the end of the session, Landry takes a mold of the bite, which is sent off to Canada, where a mouthpiece is made to slowly force the jaw to realign. Before the advent of computerized programs to help him, Landry used muscle relaxers and a splint to keep the teeth apart at night to relax the jaw. “The key with treating TMJ, headaches and migraines is getting relaxed muscles,” Landry adds.

Those relaxed muscles are achieved through the use of the TENS machine, which is a key component of the entire process. It uses rhythmic pulses to relax the muscles, which allows Landry to see how the jaw would look if set properly.

When patients turn to Landry, many are there after visiting almost every type of doctor in the area and are searching for relief.

Katie Nicholson, a kindergarten teacher at Evangeline Elementary, is one of the patients helped by Landry in the past few years.

Nicholson says she was in pain constantly: in her neck, jaw and even her teeth. She was taking four ibuprofens, twice a day, every day.

Her old dentist made her a night guard for her mouth, but it didn’t work. She saw multiple doctors, underwent two CAT scans and even had surgery for a deviated septum, which one doctor thought was the answer to her troubles.

Nicholson, who had just lost a brother to cancer, had all but convinced herself that only something as serious as a tumor or some kind of cancer would be causing pain this severe. Still she kept taking ibuprofen, which would give only moderate relief.

“At one point, my neurologist told me I was addicted to Advil,” Nicholson says.

A friend recommended a chiropractor, whom she visited three times a week for four months. Nothing.

“I didn’t know what else I was gonna do,” she says.

“The first day Dr. Landry said, ‘I really think I can help you,’” Nicholson says. “I cried in his office.”

Landry says if Nicholson would have visited him initially, he would have referred her first to other doctors to rule out a more serious cause of her pain.

“You want to eliminate the simple things first,” Landry says. If a patient goes to him first, complaining about ear pain without visiting an ENT, Landry will recommend the patient see an ENT first, just to make sure there is nothing structurally wrong with the ear or there is no fluid build up.

Another of Landry’s patients, Carol Blanda, had been living with TMJ for about 18 years, since a dental mishap left her with a dislocated jaw.

Blanda says she spent thousands of dollars on a multitude of treatments. One dentist made her a night guard and said it would ease her pain, but she says nothing changed. “It’s like putting a cast on a broken leg, but never setting the leg,” Blanda says.

For years, she had to sleep on her back, was afraid to yawn too much, could not rest her head in her hands and had to keep a running mental checklist of foods she could and could not eat.

“I can’t tell you how hesitant I was to do this, but it has changed my life,” Blanda says. “I was amazed when he told me he had a permanent solution.”