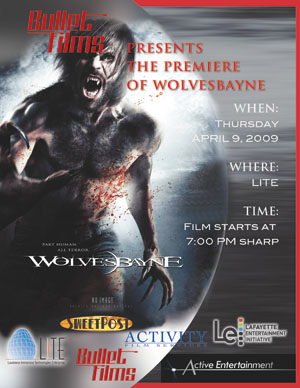 While we’re waiting for X-Men Origins: Wolverine (due out May 1), another fanged and clawed creature of the night is about to make his debut on the big screen. Wolvesbayne screens at 7 p.m. today at LITE on Cajundome Boulevard. Filmed last year in downtown Lafayette and Crowley, the shooting was shrouded in secrecy. What we do know is that Wolvesbayne, with Christy Carlson Romano, Mark Dacascos, Yancy Butler and Jeremy London, pits a colony of evil vampires against a pack of do-good werewolves.

Look for scenes set on Jefferson Street, and at the Crowley Opera House. Wolvesbayne is produced by Bullet Films, a Louisiana production company of California-based Active Entertainment, which mostly makes films that go direct to DVD. So tonight is a rare opportunity to see the film on the big screen. Seating is extremely limited, RSVP for a shot at a seat.