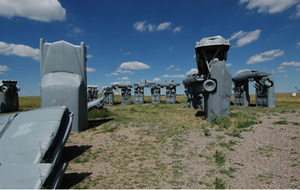 No one knows exactly what James Edmunds does. A former journalist, co-founder of the Times of Acadiana, sometimes Web designer, consulting manager (what’s that?) for PASA, the elusive Edmunds is about to expose himself. “Stronger With Each Other,” an exhibit of digital photographs by Edmunds, opens at 6 p.m. Wednesday at the Iberia Parish library.

Edmunds began his career as a professional photographer in the 1970s. He has been shooting ever since, many of his more recent photographs can be found on his blog, Poor Clio.

The upcoming show gathers “families” of photos, shot all over the U.S. during the past decade. “Among the many things I learned from my late, dear friend Elemore Morgan Jr. was that two photographs seen together could be far more than twice as interesting as two photographs seen apart,” says Edmunds. “The juxtaposition of numerous images adds up to more than the sum of its parts.”

“The exhibit quickly evolved into a group of families as they were being selected and arrayed, and I found myself thinking of my own work as I often approach that of other photographers,” Edmunds explains. “Show me one image and I see what you photographed; show me more images and I begin to see what you see. They are stronger with each other.”

“As I sorted through the possibilities for this show, a few things became obvious,” Edmunds notes. “I like to look down into roads or through openings; I am halted by a curious shape of shadow; I love the mix of personality and anonymity that defines urban life; I like to depict people, or even bugs and birds, when they are in the midst of doing something. And, I love an expanse of sky and land, sky and fields, agriculture and the heavenly clouds above.”

Photo by James Edmunds: "Carhenge," located in Alliance, Nebraska, is a replica of Stonehenge duplicated in cars instead of stone.