From rewriting the Louisiana Constitution to enshrining women’s rights in the U.S. Constitution, expect plenty of charter chatter during the upcoming legislative session. 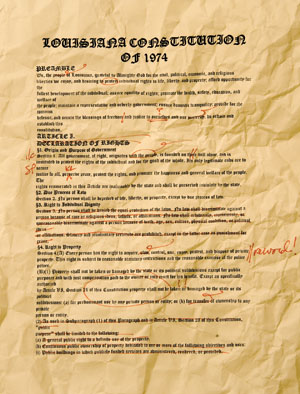 It has been 37 years, almost to the month, since Congress sent a proposed constitutional amendment for women’s rights to the states. Intense debate and progressive advocacy created an immediate wake, and on June 7, 1972, the Louisiana Senate ratified the amendment by a vote of 25-13. The House, however, did not follow suit. Around the rest of the nation, 35 states took the historic step to ratify, which was three states shy of what’s needed to make an alteration to the U.S. Constitution.

The Equal Rights Amendment was scheduled to become the 27th amendment to the Constitution. Instead, the effort faltered, and No. 27 was assigned in 1992 to what remains the newest amendment to America’s charter. The amendment restrains Congress from setting its own salary and was originally submitted in 1789, more than 202 years before it was ultimately ratified. ERA supporters are hoping their policy drive won’t take as long and their renewed efforts could actually (maybe) bring forth a 28th amendment that prohibits inequalities among men and women.

In Louisiana, Democratic lawmakers are planning to file the appropriate resolutions during the regular session that convenes later this month. State Sen. Yvonne Dorsey of Baton Rouge and Rep. Rosalind Jones of Monroe are both committed as sponsors. While a spirited debate should ensue, the two legislators face more substantial hurdles on the legal side. The 1972 proposed amendment was set to expire in 1979, but was renewed and signed by former President Jimmy Carter, even though Congress didn’t pass it by the required two-thirds vote.

Anne K. Taylor of Baton Rouge, state president of the American Association of University Women, says the proposal has been filed in practically every Congress since 1982 and Louisiana’s ratification could piggyback on those efforts. And even though the Supreme Court essentially ruled the original 1972 measure dead, it has yet to weigh in on the extension and 1982 version. More important, she adds, it’s time for Louisiana to take a stand. “This is very important for the country and Louisiana,” Taylor says. “We need to say right up front in the U.S. Constitution that we think everyone should be treated equally under the law.”

If debates in other states are any indication of what to expect, heated conversations about everything from abortion to lesbian marriage are on tap. Taylor, for one, says these topics are usually among the most controversial to come out of policy exchanges on the Equal Rights Amendment, but she counters that they aren’t necessarily relevant. Critics also contend the proposed amendment would impact the armed forces, alter the way Social Security benefits are doled out to widows and possibly change the way divorce laws are interpreted.

As for the Louisiana Constitution, it already states that “no person shall be denied the equal protection of the laws.” But that doesn’t mean lawmakers will be ignoring the Bayou State charter during the regular session that convenes April 27. In fact, there are big plans for the state constitution as well, which shouldn’t come as a surprise.

No other state has changed its constitution more than Louisiana. Since the 1974 document was adopted, voters have approved 221 amendments to its original 35,000 words. And while past changes are plentiful, there might be more in store. State Rep. Franklin Foil, a Baton Rouge Republican, joined with a number of other freshman lawmakers this spring to call for a new study commission to explore the feasibility of calling a constitutional convention.

As proposed, the study commission would be composed of 11 members: two each from the state Senate, state House and Louisiana Supreme Court, and five members appointed by the governor, including one representative each from the Public Affairs Research Council, Louisiana State Law Institute, LSU Paul M. Hebert Law Center and Southern University Law Center. If the resolution is adopted during the regular session, the commission could meet as early as this summer. It would then be required to complete its study and determine its recommendations by Jan. 15, 2010.

Foil says the recent onslaught of constitutional amendments have, among other things, tied the hands of the Legislature when balancing the budget and pushing for significant reforms. In many ways the changes can be seen as a regression. “In 1974, the people of our state approved a new constitution that made significant and needed changes,” Foil says. “The new constitution reorganized our executive branch of government; made significant changes in local government. It also reduced the document from 255,000 words to a mere 35,000 words.”

There are so many programs and services protected by the constitution, which makes budget cuts a difficult task, that many argue the only way out from under the dilemma is a constitutional convention. It would also provide an opportunity to tackle other pressing issues, like the state’s tax structure. “The legislative call for such broad constitutional change is the absolute key to any remaining chance for reform in Louisiana,” says Shreveport demographer and political analyst Elliot Stonecipher.

Still, not all are convinced. C.B. Forgotston, a Hammond attorney and senior staff member of the 1973 constitutional convention, says letting lawmakers into the constitution is the “equivalent of using a 20-pound sledge hammer to drive a thumbtack into a corkboard.”

Whether lawmakers enter into a constitutional convention remains to be seen, but there are clearly signs indicating that the last chapter of Louisiana’s charter is far from being written. The larger question, it seems, is not when will the constitution be changed, but rather how much.