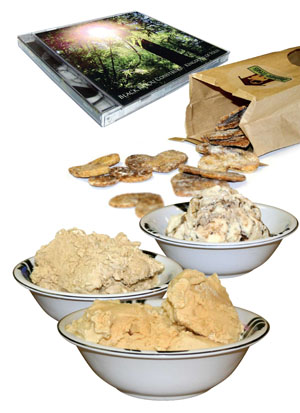 You’ll Scream for this Ice Cream
Kleinpeter Farms’ newest ice cream takes the cake — I mean pie. The Louisiana based company has teamed up with one of Acadiana’s own, Bruce Foods, to launch Homemade Sweet Potato Pie ice cream, the only one of its kind commercially produced in the United States. The recipe comes from Bruce Foods — which was experimenting with a nutmeg flavored ice cream when Jeff Kleinpeter contacted the New Iberia-based company — and it’s a palate dazzler. “We were thinking about calling him about our ice cream and he shows up,” says Bruce Foods CEO Si Brown. “Historically, sweet potatoes are a fall and winter item, so we are thrilled to have a summer mover.” The sweet potato ice cream is one of three new Kleinpeter concoctions (and the winner among Independent tasters) to hit grocery store shelves throughout Acadiana in recent weeks. The other two also feature ingredients from iconic Louisiana food company giants: cafe au lait from Community Coffee and Gold Brick from Elmer’s. — Leslie Turk

Barking up the RIGHT treats
Spoil that puppy. Actually these doggie treats look so good, Bowser might have to vie with his mistress to get a bite. Doghouse Treats is a new line of healthy homemade snacks for dogs. Following the news of contaminated Chinese-made pet food, dog owner Erin Zaunbrecher decided to take control of what her pug, Rosie, ate. Zaunbrecher began baking dog biscuits filled with items like local honey, peanuts, apples, bananas and breath-refreshing mint in a flour and egg base. Rosie loved her treats so much Zaunbrecher ramped up, and last week, her biscuits hit the street. Bags of Nutty Pupscotti, Apple Cinnamon Barkscuits, and Rosemary Cheddar Love Trainers (to be shared with the lucky pup’s owner) can be found at Jefferson Street Market, or email Zaunbrecher at [email protected], or call 706-2323 to place an order. — Mary Tutwiler

Construction Crew
It’s been four years in the making, but Black Bayou Construkt (formerly Construktion) has finally released its debut album, “Kingdoms of Folly.” No strangers to the local music scene, Black Bayou is an all-star band of sorts consisting of frontman Dege Legg (Santeria) bassist Chad Willis (River Babies) violinist Ester Tyree (The Wildflowers) keyboardist Sean Keating (Deadboy and the Elephantmen) guitarist Chad Viator (Roddie Romero & The Hub City All-Stars, Dire Wood) and drummer Hawley Joe Gary (Spank the Monkey). Fans of those respective bands should all find something to savor here, but Black Bayou is more than the sum of its parts — a classic southern cocktail of gritty rock, pop and delta blues that keeps you coming back. “Kingdoms of Folly” can be ordered through PayPal and soon at cdbaby.com . For more info, visit degelegg.com . — Nathan Stubbs