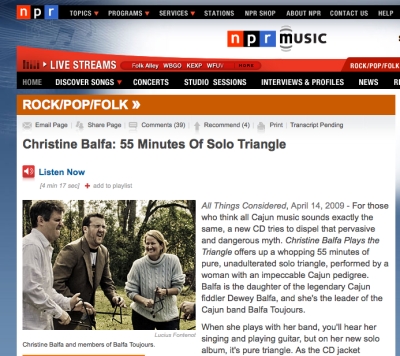 Well it's about time. It took Valcour Records and Christine Balfa producing an entire album of Cajun music on nothing but a triangle, but the national media is starting to pay attention and to acknowledge the triangle as a legitimate and indigenous instrument. The CD was fist brought to national attention when it was profiled in February by The New York Times:
Ms. Balfa won’t change the mind of anyone who thinks there are actually only two Cajun songs, a waltz and a two-step (though different waltzes start their pattern on different beats). But these rigorous, hypnotic tracks could build admiration for the selfless, essential toil of rhythm sections everywhere.

On Tuesday, National Public Radio's Melissa Block featured Balfa's solo triangle album, Plays the Triangle (which was also featured in the April Fools' issue of The Independent) and interviews producer Chas Justus about the project. (You can hear the whole interview here.)

The reaction of NPR's listeners has been mixed. Some have commented on NPR's site that the piece was "hilarious" and "quirky." Mona Bernard of Lafayette, though, writes that it's just downright silly. "It's boring and — despite your position to the contrary — reinforces the opinion that all Cajune [sic] music sounds the same. Any Cajun who hears this will laugh and think it's a joke. Really! The emperor has no clothes on this one."

But Eric McDowell, who listens to NPR in Seattle, isn't amused in the least:

I have been a supporter of NPR for a decade and I listen daily. Until today, I have never been moved to leave a comment. However, this was by far the worst use of my donor money I have ever heard. I thought I had accidentally tuned into "The Onion" or some other program. While I very much appreciate the humor All Things Considered brings to the table, this story was by far the worst single story I have ever, ever heard in more than 30 years of listening to NPR.