Hundreds of Acadiana residents assembled in Putnam Park across from the federal courthouse in downtown Lafayette for a TEA party, one of thousands held nationwide that kept Fox News spellbound for the better part of tax-deadline day. TEA is an acronym for Taxed Enough Already and makes allusion to the Boston Tea Party; it's a protest against government spending, burgeoning deficits, bank and auto bailouts, the roll back of the Bush tax cuts, the American Reinvestment and Recovery Act. 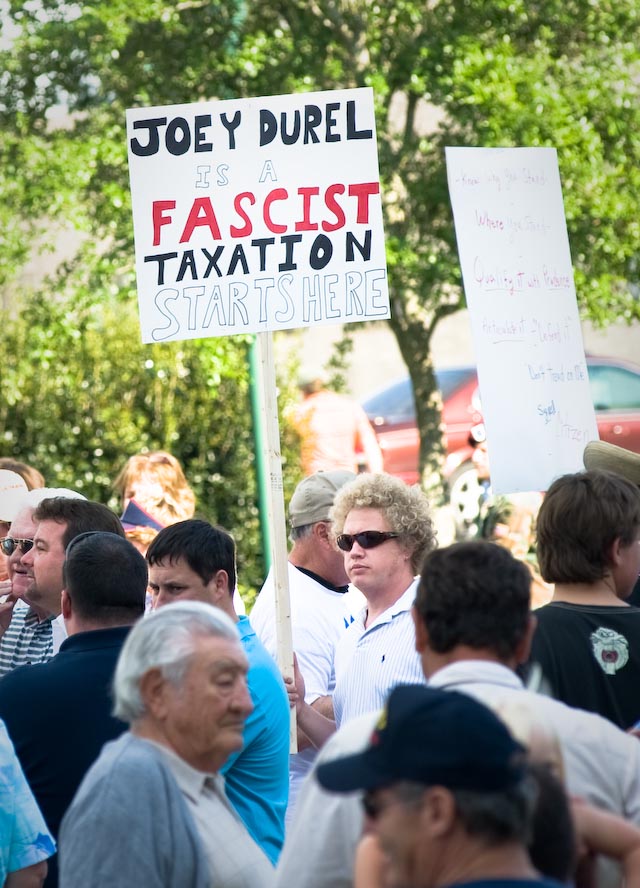 Because the organizers of the Lafayette TEA event failed to secure a permit in the prescribed time, they were unable to erect a stage or use a public-address system. Instead, speakers took turns using a bull horn to address the crowd. Based on the signs carried by participants, their grievances were many: anti-stimulus spending, complaints of encroaching socialism, one branding Lafayette City-Parish President Joey Durel a fascist. The gathering, however, was peaceful, if not energetic, watched over at the margins by Lafayette Police officers and curious onlookers and fussed over with live coverage by local news channels.

The tea bag movement has been the object of derision and humor among many on the left, in part for its earnestness, but also because of its unintended reference to a certain sexual activity practiced by gay men. Organizers of some TEA gatherings had urged supporters to be wary of liberals with video cameras trying to capitalize on the double meaning of the term “tea bagging.” A YouTube video viewed more than 78,000 times makes reference to the entendre. Be warned: The video gets a bit salty at times.