Lafayette has just been recognized by both Money magazine and Forbes as one of the best cities to find a job. Money’s May feature, “Money 100,” which it calls an annual guide to the best investments, strategies, products and people in the world of money designed to help “you find the upside of the downturn,” lists Lafayette among the best six places in the country for finding a job. All six metros have populations of 200,000-plus and a combination of unemployment rates well below the national average and a high proportion of professional jobs. The Money story (see the Lafayette plug from Page 78 in image below, which lists the six metro areas' populations, jobless rates and major industries) is just out on newsstands. 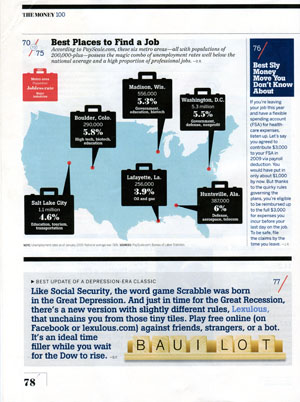 Forbes lists Lafayette as No. 3 among mid-size cities, behind No. 2 Tulsa, Okla., and No. 1 McAllen-Edinburg-Mission, Texas (located in the southern most part of Texas, near the Mexican border). Here's what Forbes has to say about Lafayette: Even though the number of jobs in the region fell 0.4% between 2007 and 2008, Lafayette still makes our list of best mid-sized cities for jobs. That’s because between 1997 and 2009, job growth was 16.3%. That overall boost was aided by specific jumps in the natural resources, mining and construction sector (which provides 24,500 jobs), as well as the education and health arena (which boasts 21,200). In addition, Lafayette offers relatively low labor costs and a strong petroleum and natural gas industry. Since Hurricane Katrina, the town’s population has increased as New Orleans residents relocated to Lafayette. Home to the biggest mall in the region, Lafayette also had 17,600 jobs in the retail sector in 2008.