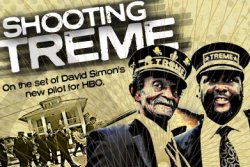 If you haven't already, check out Gambit Weekly's cover story this week — "Post-K-ville" — about David Simon's pilot for Tremé, which just wrapped up shooting in New Orleans. There's also this Q&A with Simon.
It was the final hours of filming for Tremé, the pilot episode of David Simon's prospective HBO drama, and already the show had run up against questions of realism — i.e., it was due to wrap almost on schedule. Despite threats of rain and hail, the planned 17-day shoot finished on April 2 with a scene at The Times-Picayune's Howard Street offices.

The location was a fitting sendoff for Simon, a former crime reporter at The Baltimore Sun. As creator of The Wire (2002-2008), HBO's universally praised, ratings-deficient supernova, Simon's presence in New Orleans throughout the month sparked a media firestorm about the potential of this follow-up, and for good reason: He brought with him a formidable crew, both in front of the camera (a cast led by film veteran Steve Zahn and The Wire alums Wendell Pierce and Clarke Peters) and behind it (the award-winning [Agnieszka] Holland and an all-star team of scribes, including co-producers and frequent collaborators Eric Overmyer and David Mills, Washington, D.C., crime novelist George Pelecanos, and local writers Tom Piazza and Lolis Eric Elie).

And though the New Orleans setting is a graveyard for televised fiction — as the authors of Fox's unintentional comedy K-Ville (2007), canceled after just 11 episodes, can attest — Tremé's assemblage of literary talent presages the same multilayered, novelistic approach that endeared The Wire to its small-yet-fervent fan base. There is also the man at the helm, whose surname now carries the weight of TV production greats like Bochco, Ball, Abrams and Chase, and whose collaborators believe his passion for New Orleans culture and his journalistic approach to narratives make him the perfect man for the job.