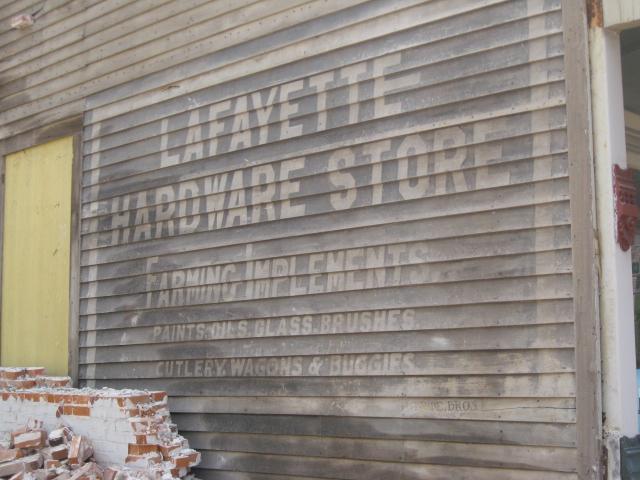 The removal of a brick wall that once supported the old LBA Savings Bank drive-thru on West Vermilion Street downtown on Monday revealed a relic from Lafayette’s commercial past: a sign for Lafayette Hardware Store. Now, the building’s owner says that historic gem will be saved for posterity.

Yvette Voorhies, whose family has owned the building since the early 20th century, dropped by the site after word spread. Almost immediately talk began of what to do with the sign. There was a never a question of not saving it, and historic preservationists have since been consulted.

The drive-thru wall was built literally inches from the clapboard side of the wood-frame building currently occupied by architectural/interior design firm MBSB Group. The sign advertises the store’s supply of paints, oils, glass, brushes, cutlery, buggies and wagons and appears to date to the early 20th century. The drive-thru is being demolished to make way for an expansion of the Acadiana Center for the Arts.

The concensus among staff members at MBSB groups seems to be to remove the sign and relocate it inside the building. Voorhies says her preference is to leave the sign where it is. There will be a five-foot gap between the building and the theatre expansion for the AcA.

The building, according to Voorhies, is the oldest commercial building standing in Lafayette. It was occupied by several businesses early on, and a telephone company even occupied the second floor. Voorhies’ grandparents operated the hardware store. “We don’t even know how old the building is,” says Voorhies, “the first time is shows up in the clerk of court’s office is 1890.”