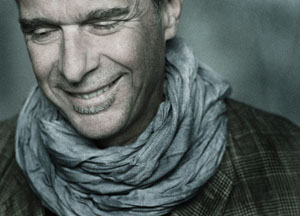 Sit down with singer-songwriter Zachary Richard for a Q & A and it’s a little bit of Q and a whole lot of A. The dude can talk. An idle ice-breaker about his house prompts a 10-minute dissertation on traditional Cajun architecture, and on the pitfalls of hiring carpenters who stray from the floor plan. Richard and his father built the house almost 30 years ago on a strip of land that was once outside Scott, but is now within the taxable boundaries thanks to annexation. His dad hired out-of-work carpenters to save money. “There’s a reason why they were unemployed,” Richard observes with a chuckle. The house — bare wood and pure Cajun from the pitch of the roof to the wide front porch — is settling in ways that unsettle its owner.

When Richard performs at Festival International de Louisiane this weekend before a hometown crowd, it will be his first big concert in support of his new record, Last Kiss. The dozen songs carry Richard’s lonesome tenor over familiar musical and emotional terrain. “I’m just glad when I can write a song that I like,” he says, “There’s a very strong tendency toward melancholy in my writing. I don’t know why that is. I don’t consider myself to be a depressed person necessarily. Maybe I have this Romantic notion of life.”

What will perhaps be most talked about is his duet with Celine Dion on the record’s final track, a Robbie Robertson song titled, “Acadian Driftwood,” about the 18th-century expulsion of the Acadians from Canada. But this is not the pop diva, she of the bombastic ballads, making a cameo on Last Kiss; it’s a French-Canadian vocalist with some serious chops. “Acadian Driftwood” reveals a much different Celine Dion. “It’s in a key that’s very low for her,” Richard says, “which allows her to get into a part of her voice, her vocal range, that nobody knows exists ... A lot of people have asked me, ‘Who is that?’ you know? I say, ‘Celine Dion,’ they go, ‘man.’”

But having an international superstar on your record is complicated. “It doesn’t pose a problem to me, but it’s a marketing problem to have Celine Dion on your record,” Richard confesses. “But what I tell people is, this is not a Celine Dion record, this a Zachary Richard record and she’s coming into my world, I’m not going into hers. This is not about putting Celine Dion on my record. This about having a great singer who’s also my friend participate in a recording project, which means something to both of us and we had fun doing. And I think when people hear this they’ll be surprised about what it is that she does, but I mean the girl can sing and she has a tremendous amount of soul.”

What is most striking about Last Kiss is the almost total absence of the French language. One song is in French, along with a sliver of the chorus in “Acadian Driftwood.” It is a departure for a musician who has buttered his bread musically in the language of his ancestors. “This record being in English is going to allow me to redevelop my relationship with an American audience, hopefully,” Richard says, betraying doubt in the willingness of an American audience — a Louisiana audience, for that matter — to embrace him. His doubts are not unfounded; while Zachary Richard has enjoyed multi-platinum success in Canada and France — he is a household name in Quebec — his career in the United States has been spotty. He recorded his first record in 1972 at age 21 for Elektra. The record was shelved for 18 years and released in 2000 by Rhino. American record labels, as Richard explains it, are about results (sales) now, not artist development. “We were touring, we were doing 150 dates a year, this was in ’92, ’93, ’94,” Richard recalls of his time with a subsidiary of A&M Records, “and I’d go to a place, I’d go to San Francisco, and I couldn’t find my record in any of the stores. So, there was no support, they had just given up on the record.”

Last Kiss makes a good first impression. It’s at once lush and spare, and filled with the plaintive longing of a Cajun boy far from home. But the Cajun boy is home. Richard spends about half his time in Acadiana, the other half in Canada. “I have this Cajun son devotion to my mother to make sure that she’s OK,” he explains of his increasing residency in Louisiana. Richard’s father passed away in 2005. His mom is 87.

But don’t think you have Zachary Richard figured out. He is a singer-songwriter in the classic mold, but his subject matter has long legs. “A love song in the classic tradition,” Richard writes in the song commentary to “Fire in the Night,” the second track on Last Kiss, “although in this case I imagined the protagonist to be Allen Ginsburg and object of his passion Jack Kerouac.”

Zachary Richard performs at Festival International de Louisiane at 7:30 p.m. Saturday at Scène Fais Do Do.

Last Kiss is available now at www.zacharyrichard.com . It will be available widely on its release date, Tuesday, April 28.