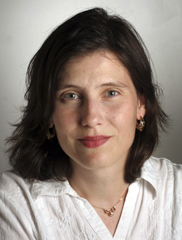 Announced yesterday, the prestigious Pulitzers included the work of a familiar name. Former Daily Advertiser reporter Angie Drobnic Holan, who wrote for Lafayette’s daily paper from 1999 to 2000, is a reporter and researcher for the St. Petersburg Times’ Pulitzer Prize-winning PolitiFact, an online service that aims to separate truth from fiction in political statements. (There’s even a photo online showing Holan giving a congratulatory hug to PolitiFact founder Bill Adair in the paper's newsroom.)

The St. Petersburg Times also won for reporter Lane DeGregory’s “The Girl in the Window,” a gut-wrenching narrative describing the journey of a 7-year-old girl found living in a small filthy room to her adoption into a loving family.

PolitiFact was launched by the Times in 2007, its Truth-O-Meter ruling on the accuracy of hundreds of statements made by politicians (and even anonymous chain e-mails) during the 2008 presidential campaign, according to The Poynter Institute, which owns the paper. The site was relaunched in January with a broader focus on statements made by pundits and opinion makers and a new “Obameter” to track President Barack Obama’s progress on 500 campaign promises.

Reached this morning on her cell phone, an elated Holan says she was taken aback that the unique Web-first site, which often incorporates editorial judgments tinged with humor to determine if someone is telling the truth, would be honored with a Pulitzer. "It was really surprising they would recognize something so new and different," she says.

Holan, 36, has worked as a researcher at the St. Petersburg Times since 2005 and has a master’s degree from Columbia University Graduate School of Journalism. Before joining the St. Petersburg paper, she was a researcher at the Tampa Tribune and also worked as a reporter at Mobile, Ala.'s Press-Register from 2000 to 2002. Her mother, Faye Drobnic, lives in Lafayette. "I grew up in Patterson," Holan says, "but when I go home, I go home to Lafayette."

Before winning the Pulitzer, PolitiFact won a National Press Foundation award for Excellence in Online Journalism. It has also received a Knight Batten Award for Innovation, a NAA Digital Edge Award for Best Overall News Site and was one of PC World’s “100 Incredibly Useful and Interesting Web Sites.”

Here’s how site developer Matt Waite describes PolitiFact’s beginnings on Poynter Online:
“PolitiFact was born when St. Petersburg Times Washington Bureau Chief Bill Adair called me in very late May with an idea he had. He wanted to take the ‘truth squad’ idea and expand it. And he wondered if we could somehow use databases with this idea. He didn’t know how we could do that, just that we should, and that was why he was calling me. I was knee deep in learning Django, the rapid development Web framework, and immediately knew we could use Django to make this happen. Based on our conversation, I quick sketched out a series of related tables -- models in Django parlance -- and PolitiFact was born.”
Poynter also reports that PolitiFact, which has its own theme song, is one of the first Web sites to be honored by the Pulitzers, which began considering online work in 2006.