Lafayette Consolidated Government has shelled out more than $228K in rent for a fiber office it isn’t using. 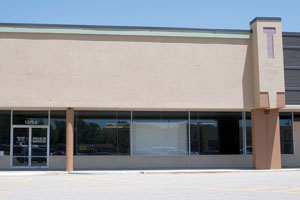 Over the past 13 months, Lafayette Consolidated Government has been leasing vacant retail space in the Acadian Village Shopping Center on West Pinhook Road. Slated to house both a customer service call center and retail showroom for Lafayette Utilities System and its fiber-to-the-home business, today the 10,240-square-foot space is an empty shell. A few sections of leftover carpeting and some florescent light fixtures are all that remain from the building’s former tenant, Fashion Warehouse, which moved out last year. A door-sized display on wheels showing a utility meter and cable box hookup against a painted brick backdrop is parked in the front corner of the shop — the only evidence of its new tenant’s presence.

To date, local government has spent nearly a quarter of a million dollars leasing the property. Meanwhile, LUS is still finalizing its architectural plans for renovating and utilizing the space. Are public tax dollars going to waste? Not according to LUS Director Terry Huval, who vigorously defends the expense. City-Parish President Joey Durel did not return a call for comment.

Huval says the property was leased last year as the public utility was working toward its then-stated goal of rolling out its fiber-to-the-home business in January 2009 (because of delays, the project did not end up launching until February). He maintains that the public utility needed to secure a space well in advance to allow time to follow public bid law in hiring a contractor to make any necessary renovations. “We knew we were going to need a good retail presence,” says Huval, adding that location and price were other key factors in making the decision.

LUS hired a real estate agent, Flo Meadows of Coldwell Banker, and began scouting properties. At that time, Meadows says, good mid-sized retail properties were hard to come by. “Given their search parameters, we had two properties to consider,” she says. The two properties were the Fashion Warehouse building in the Acadian Village Shopping Center along the corner of West Pinhook and Kaliste Saloom roads and a portion of the old Academy building in the Grand Marche shopping center at Johnston Street and Camellia Boulevard. While the Grand Marche building was priced at a lower rate ($10 a square foot), it was a much larger space which would have also required extensive renovation work. Ultimately, Meadows says the Pinhook Road location ultimately won out due to its higher visibility (the Grand Marche spot did not directly face Johnston Street) and closer proximity to LUS’ other facilities.

“At the time we were looking at a very different economy than what we have today,” Huval says. “All these properties were going pretty fast at that particular time, and this was the lowest cost option we had available to us. We didn’t have a lot of time to make a decision.”

The Fashion Warehouse property had recently come on the market, and Huval says it was too good a deal to pass up, even though the public utility was not ready to move in. “It was a choice between doing that or perhaps having to lease a more expensive piece of property later on. So the idea was to capture something that was affordable,” he says. “Our plans are to be there for a while.”

Huval contends all of these properties had their issues, including size, location and extensive renovation costs, that caused LUS to pass on them in favor of the Acadian Village location, which is located between Crazy Charlie’s Shoes and Centennial Wireless. LCG signed a five-year lease on the property, commencing March 3, 2008, and running through Feb. 28, 2013. According to the lease, which was recorded in the parish courthouse March 11, 2008, city-parish government pays rent up front on an annual basis. Rent for the first year was $92,160, then went up to $122,880 beginning this year through the remainder of the lease. The city also is charged an annual Common Area Maintenance fee at a rate of 65 cents per square foot, or $6,656 a year. To date, those costs total $228,352. The lease was signed by the property’s owner, Scott Gordon of Gordon Investments and Durel. The lease was approved by the Lafayette City-Parish Council.

After the property was secured, the city enlisted Architects Southwest (Durel chose the architect based on recommendations from the council’s professional services committee) to draw up renovation plans for the space. The renovations will require installing new handicap accessible bathrooms and office space. Last summer — when construction costs were at a premium — Architects Southwest brought back estimates for the renovation work in the $1.5 million range, a price Huval says was too costly. As the launch date neared for the fiber project, LUS re-evaluated its plans, opting to locate its initial fiber-to-the-home customer service center alongside its utilities office at City Hall. This bought time to plan for a more cost-effective way to utilize the storefront on Pinhook Road.

LUS now plans to provide customer service for both its fiber business and its utilities business out of the Pinhook space. A call center will handle customers over the phone, while other reps will be standing by to service walk-in customers. In addition, Huval says the store will double as a floor room for LUS fiber, with computers and widescreen TVs showcasing LUS’ cable and high-speed Internet service. “We’ll have the facilities necessary for customers to be able to actually test the system,” Huval says. He now hopes to open the center this fall.

Because the location will now be used for both the utilities and telecommunications divisions, LUS will have to carefully tally and divide costs. The 2005 Local Government Fair Competition Act — a bill passed by the state Legislature enabling LUS’ fiber venture — prevents LUS from sharing any costs between its utilities and telecommunications operations.

While Huval says LUS does have some new preliminary plans for its renovations to the space, he declined to provide those to The Independent.

“I’m not releasing that yet,” he says. “That’s still something that we’re going through now, so I’m not going to put something out there that’s going to end up changing.”

Huval adds he is confident that in the long run, LUS’ decision to lock down its retail space at the time that it did will prove to be the right one. “After all the smoke is cleared,” he says. “I think we’re going to end up saving far more [money] than the extra rental payment by virtue of doing this.”