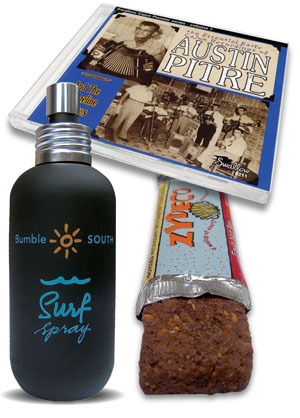 A WALLOP OF CURLS
Summer is right around the corner, and what better way to catch a wave than with perfectly tousled curls that make it look like you just left the beach. Bumble and Bumble’s Surf Spray mixes salt water with moisturizing seaweed extract and sea kelp to give hair a sexy, wind-swept style that has just the right balance of texture and hold. It adds volume to roots and body to fine hair while it minimizes those pesky flyaways that seem to thrive in our Louisiana humidity. And styling with Surf Spray couldn’t be simpler, or more versatile. Use it on damp hair or dry hair, then let air dry or dry with a diffuser. Curl with a curling iron for more defined waves, use a three-barrel iron for some fun or stick to scrunching for a more casual coif. The only limit this stuff has is your imagination. Surf Spray is available for $22 at Studio One 2 One, 233 Doucet Road, Suite A3A. Call 264-1444 for more info. — Maria Capritto

A WALLOP OF ENERGY
If your Whiskey River zydeco moves have more whiskey than zydeco, this energy bar is for you. Made of whole wheat, oats and soy, packed with Louisiana sweet potatoes, toasted pecans, local honey, turbanado sugar and molasses, and spiked with a hint of cinnamon, the new Zydeco nutrition bar offers five grams of protein and complex carbohydrates in a low-calorie, high-fiber, tasty package. Created by health conscious attorney Michelle Vallot, initially to keep her going during a long day at the office, the bars are hitting local stores this week. Great for breakfast on the run or a high octane boost when your two-step is flagging, Zydeo bars, $2, can be found at Red Lerelle’s, Sandra’s Health Food, F. Camalo, Precision Bikes, Cedar Grocery and the Lafayette Center for Yoga. For more info, check out the Web site at www.zydecobars.com . — Mary Tutwiler

A WALLOP FROM THE GRAVE
Austin Pitre was Cajun before Cajun was cool, and Swallow Records is making sure everyone knows it. The flamboyant accordion player and singer passed away in 1981, a month after completing a three-week national tour with D.L. Menard and others. Pitre is credited with being the first accordion player to perform standing up. He was also known as an exuberant showman, often playing with the accordion behind his head or between his legs. In “The Essential Early Cajun Recordings of Austin Pitre,” we get an unbridled earful of Pitre and his Evangeline Playboys from a 1959 Swallow recording session. The disc opens with the seminal two-step “Les Flammes D’Enfer” (The Flames of Hell), Pitre’s first single. The squeeze box master is joined in the recording session by Cabri Menier (steel guitar), Harry LaFleur (fiddle), Eston Bellow (drums) and Dickey Gill (guitar). During an almost decade-long run from the late 1940s to mid-50s, Austin Pitre and the Evangeline Playboys were the hottest ticket from Ville Platte to the Vermilion Parish line. And talk about short and sweet songs; there are two dozen tracks on this disc! “The Essential Early Cajun Recordings of Austin Pitre” costs $15.98 and can be purchased at flattownmusic.com — Walter Pierce