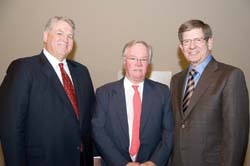 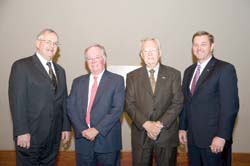 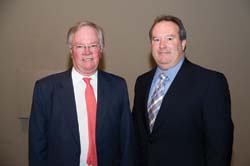 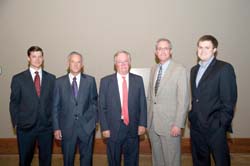 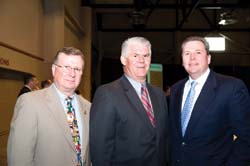 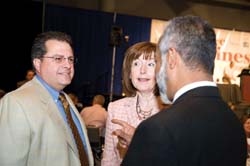 Keith and Margaret Trahan and Joby John of UL 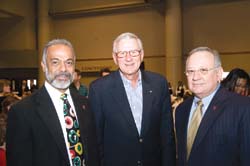 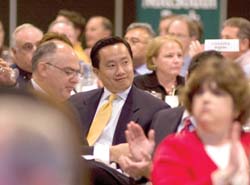 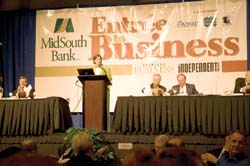 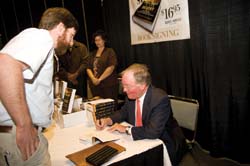 Simmons signs copies of Twilight in the Desert

Prominent oil-industry insider Matthew Simmons addressed a sold-out crowd at the Cajundome Convention Center in early April. One of the world’s leading experts on the topic of peak oil, Simmons spoke as part of the Entrée to Business series, presented by MidSouth Bank and produced by Acadiana Business and The Independent Weekly. And while his informed perspective on the future of the oil and gas industry, “Can The Pelican State Survive Our Oil And Gas Turbulence,” did not disappoint, it was less than upbeat.

But this time around, the state may not be in a position to take advantage of a boom cycle. The lingering problem lies in Louisiana’s aging oil and gas infrastructure, he noted. “As one of the oldest oil and gas producers, Louisiana’s entire infrastructure of platforms and pipes is extremely rusty,” Simmons said, noting that three decades of “maintenance” is no longer viable. “Ninety percent of the oil and gas infrastructure is beyond its design life,” he added. From hurricanes Ivan to Dennis, Katrina, Rita, Gustav and Ike, platforms and pipes have taken a beating. “Some of the newest assets were hit the worst,” he told the crowd.

Simmons explained that workforce issues are just as challenging: few people entered the business from 1982-2000, job descriptions grew increasingly technical and complex, and the best jobs were in foreign countries. “The problem is global,” he continued, “but Louisiana demographics might be among the worst.”

Who the experts of tomorrow will be remains the biggest question mark. Simmons said only a handful of second and third generation pioneers are still involved in oil and gas, many fourth generation are beginning to retire, and too many fifth generation never entered the industry.

“We still have reason to be optimistic that we will weather this economic downturn, but we want to hear the truth about the future of our industry and the role it will continue to play in south Louisiana’s economy,” MidSouth Bank President and CEO Rusty Cloutier said following the luncheon. “MidSouth Bank is committed to remaining at the forefront of helping its customers and the community at large understand the dynamics of this industry.”

Knight Oil Tool’s Doug Keller, who first introduced Simmons’ work to The Independent Weekly and Acadiana Business’ publishers, was a supporting sponsor for the luncheon. As part of their contribution, supporting sponsors Knight, Dwight Andrus Insurance and the Louisiana Oil and Gas Association enabled a group of UL faculty and students to attend the luncheon.

The lecture included a lengthy question-and-answer session. Toward the end of his discussion, prompted by questions from UL students and faculty, Simmons stressed the need for alternative energy sources to meet the country’s needs in the coming decades, noting that people will be forced to make lifestyle changes. “We’re basically going to have to travel less,” he said.

Independent Weekly and Acadiana Business co-publisher Cherry Fisher May said Simmons’ appearance was a five-year goal for the series. May was finally able to make a personal connection with the respected expert through his friend, MidSouth Bank board member Paul Hilliard, a Lafayette oil man.

Simmons’ most recent notoriety results from his best-selling book Twilight in the Desert and the ‘peak oil’ theory it explores. Peak oil is the point in time when the maximum rate of global petroleum extraction is reached, after which the rate of production enters terminal decline. “If peak oil is real, it is a very very serious problem,” Simmons said, shortly before retiring to the back of the room to sign copies of his book