A group of local women took the Go Red for Women Personally Fit Challenge and won a new lease on life. 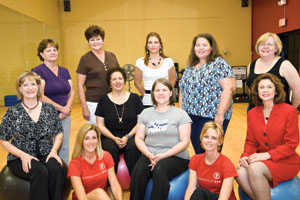 The word hope can be a powerful tool.

To some, losing weight and regaining a level of fitness falls into the latter category, but as with all tasks, where there is a will, there is a way.

Round up a group of women and ask them what they fear the most, breast cancer or heart disease, and a majority will say breast cancer. They’re not likely to know that heart disease will affect one out of every three women some time in her life.

The American Heart Association began its Go Red for Women initiative five years ago to educate women on the dangers of heart disease. The Lafayette chapter launched the Go Red luncheon three years ago (this year’s is Thursday, May 7), and this time around decided to add fitness to the regimen, giving birth to the Go Red for Women Personally Fit Challenge.

“It centered around letting women know about their risk for heart disease and how they can lower their risk,” says Laura Broussard, regional director for the American Heart Association.

“It’s one of the silent killers people don’t talk about, and if it is not genetic, then it’s preventable,” Broussard adds.

Out of 37 applicants, 11 women were chosen to be the guinea pigs for the initial trial run, with The Independent Weekly agreeing to follow their progress, publishing a series of stories over the past three months. During the 12-week program, two women dropped out for various reasons, with one alternate filling in.

Each participant has a reason, whether it be for her children, family medical history or to boost energy levels, to join the program.

Landry says she’s tried all of the other exercise routines, the videotapes and the gym memberships, with less than sparkling results. The natural progression was to try something new.

“I wanted to see if this works, everything else didn’t and at some point you just give up and say ‘I tried to do it all,” she says.

Romero tells a story of wanting to get healthier for her two young girls to show them that they can live a healthy lifestyle. “I didn’t come this far to give up on myself again,” Romero says, noting that her determination has rubbed off on her 5-year-old daughter, whom she says is now interested in exercise and nutrition. “She thinks fitness is cool,” Romero says.

Hakala saw an opportunity to get fit and took it. “I’m tired of being tired,” she says.

Interviewed together, at the close of the program, the group speaks about hope — not hope that pounds and inches will just vanish away, but hope that they have found something that will work for them long term. “I come from a family with a history of heart disease, and it got to the point where I wanted to do it for my health, make myself a better person, be more active and do it for me,” says Gleason, who doesn’t look anything close to her 64 years.

During the 12-week program, Gleason’s sister — who is only a year older — suffered a heart attack. Her sister is doing better, but the episode put the fragility of life in perspective for the fitness challenge participant and gave her a determination to work harder.

In sports, when coaches talk about the team aspect of a game, whether it be football or basketball, they speak of many factors, but one stands out above the rest: accountability.

“They hold you accountable for everything: that’s what this group does,” Landry says.

“I was accountable to people, I was accountable to other people,” agrees Thibodeaux, who no longer calls the treadmill the “dreadmill.” “I was accountable to some one beside myself. It puts pressure on you to do what you need to do.” They all agreed that accountability made the biggest difference between this program and other weight-loss plans they have tried in the past. During their time together, the participants bonded and became more than friends. They’re like family now.

“These women, no matter what things went on in their lives, they still would inspire you,” Thibodeaux says. “Their strength, their determination, it inspires you. Every day I knew to come because I knew they were coming and they had things going on in their lives, and it was so much more fun.”

On this day, they are all smiling about the success of the journey; for some, however, the results are staggering.

Personally Fit’s Dawn Foreman says that the participants attended all of their workout sessions, individual and group, but what separated the biggest losers from the rest was how disciplined they were when it came to nutrition.

“The results are always individualized, and we have a few ladies that committed more to the nutrition part of it. All of them committed to the exercise portion where they pretty much came in four to five days a week, but the nutrition portion, some of them had weeks where they fell off a little bit,” Foreman says. “Others who didn’t slide at all, they stayed true to the program for the entire 12 weeks.”

Of the nutritional discipline, Foreman says, “It was vital. You can’t do one without the other and expect the results they got.”

In addition to the workout sessions, the group met on either Tuesday or Thursday and discussed healthy eating habits, like substituting whole wheat versus white starches and other sabotaging sustenances that derail progress. They were taught to understand why we eat what we eat in certain situations and how to deal with stress eating. They went shopping as a group and learned to read labels and how to spot the good from the bad.

They also used Vitabot, a software pack that helped create meal plans for them and gave them report cards for how they were eating: whether they were sticking to the diet plans or not.

“Wherever they are right now is so much farther along in their health and fitness levels than they were 12 weeks ago; it’s a success for every single one of them,” Foreman says. “This is something they are going to stick with for life. This is just a jump-start for the rest of their life; it’s not a fad.”

“It’s lifestyle behavior changes,” adds Lafaye. “They have learned different strategies to attack their daily lives and say, ‘this is the way I have to live now.’ To be healthy you have to fix yourself.”