Acadiana Center for the Arts curator Rose Courville ends her career in Lafayette with a blockbuster show. 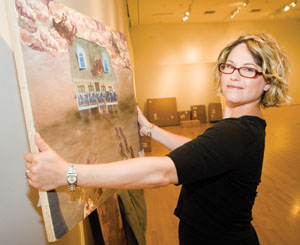 The third annual Southern Open, a juried art competition, will preview Saturday night at the Acadiana Center for the Arts — an opening that will mark the end of the tenure of the ACA’s first curator, Rose Courville.

Swept into Lafayette by Hurricane Katrina, Rose has made a lasting mark on the art scene, raising the bar on the quality of art shows not only at the ACA but all over town during her three and a half years here.

Actually, her role as arts maven in Acadiana began before Katrina. David Houston, curator of the Odgen Museum of Southern Art in New Orleans, was brought to Lafayette to curate the opening show for the ACA in 2004. Rose was his assistant and spent 10 days in Lafayette, rounding up the pieces from local artists that Houston had selected. With colleague Erin Lee Benson, she hung the entire show. This is no small accomplishment, especially for a petite, 5-foot-2-inch woman in a 5,000 square foot gallery. “We got done early,” says Rose. “Erin Lee and I were so proud of ourselves, we sat outside the ACA on the concrete at about 3 o’clock in the afternoon and drank a bottle of champagne to celebrate getting the show hung.”

Back at work in New Orleans, she met Lafayette native Chris Courville. Known to his friends as “Oscar,” the drummer for the Lost Bayou Ramblers and on occasion the Bluerunners, Chris is a Web site programmer in his day job. He was the roommate of Rose’s co-worker. “I realized I had a crush on him,” she says, “but you don’t date your best friend’s roommate. It’s so dangerous. It can get really messy.”

One night, after a big opening at the Ogden, Rose and Chris were attending a celebratory dinner. Rose downed three martinis, and full of Dutch courage spoke her heart. “I leaned over and told him I had a crush on him,” she recounts. “He didn’t say anything.”

The evening finally wound down, and Chris walked her to her car. Rose, embarrassed, gave him a hug goodbye. Chris put his mouth to her ear and whispered, “‘I’ve had a crush on you since the moment I saw you,’” recalls Rose, blushing at the memory. They were married in March 2007.

When Katrina threatened the Crescent City, Rose and Chris evacuated to Lafayette rather than to her parent’s home in Hammond. “I had heard about all the great crawfish boils and parties in Cajun country during other evacuations,” she says, “so I thought it would be fun to be in Lafayette for a couple of days. We watched the news and saw our houses flood.”

A month later, the Ogden let all its employees go. Rose rented an apartment in Rayne, Chris toured with the Ramblers in the post-Katrina, post-Rita fundraising environment. Lonely in Rayne, Rose went to the ACA and asked Buddy Palmer to allow her to patch and paint walls or lick envelopes. Instead he hired her to run Project Heal, and within 60 days, the powerfully raw show “Sustained Winds” opened to a stunned audience.

“Sustained Winds,” the first juried show at the ACA, gave artists a place to express their emotions. “The artists got me through the storm, and I think the show got them through the storm,” says Rose. Photographs, paintings, sculpture, textiles and video caused viewers to weep in public. Out of that experience, the Southern Open was born.

This year 227 artists sent 900 submissions to the jury. A total of 72 works will be on exhibit, the best of the best from Texas, Louisiana, Mississippi, Alabama and Florida.  “Each year it’s getting more and more competitive,” she says of the juried show. “It’s evident in the rising quality of the work; this year is no exception.

“The diversity is incredible in Acadiana. There is so much work here, I could probably program the Side Gallery alone (which rotates 12 shows annually) for four or five years. Since I’ve been here, I’ve had the role of fostering artists and helping them with the opportunity that they can go on to bigger markets and more prestigious institutions. And maybe me, helping them here, helps them get there.”

The community will lose two talented artists when Rose and Chris leave for Baltimore in one week. Chris has been accepted by Johns Hopkins University in biomedical engineering. Rose is scouting the Maryland art world for possibilities.

“I feel like I’m part of a family of artists,” she says. “I’m going to miss them so much. I don’t know how to say goodbye.”

The Southern Open, a juried competition, opens Saturday, May 9, at 6 p.m., at the ACA as part of the May Second Saturday ArtWalk. The show continues through July 25. Call the ACA, 233-7060, for more information, or check out its Web site at www.acadianacenterforthearts.org .