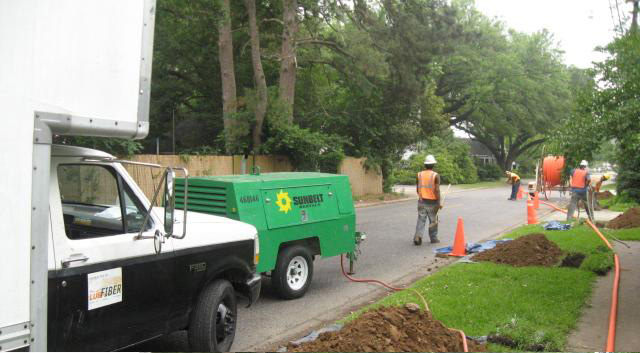 LUS Fiber work crews have recently been out digging up ground and running cable along the side of the road in the Saint Streets and Oaklawn neighborhoods. And for residents (like me) wondering whether fiber service may be coming sooner than they thought (Much of Oaklawn is located in Phase 3 of LUS’ Fiber buildout schedule), the answer is, maybe.

LUS Director Terry Huval says that work crews are wiring streets outside of Phase 1 as it makes sense to do so. “Phase 1 is just where we started,” Huval says. “We always said that that’s the general direction we’re going in but there’s going to be some overlap [into other phases] as we got crews finished. We’re not going to have them wait; we’re going to keep them working. That’s the most cost-effective way to get this system built.”

Even though you may see crews laying fiber in your neighborhood, don’t expect the service to be available the next day. Huval says it generally takes four to six months from the time fiber is buried or hung on poles in a subdivision to the time when LUS will actually start taking customers there. (LUS must first go back and splice cables together, test and map the system). However, Huval says most Saint Streets residents can expect service to be available some time in the fall.

He adds LUS is on track to meet its goal of being able to provide service to anyone within the city limits by the first quarter of 2011. Currently, Huval says, LUS is offering service in some areas around the Acadiana Mall and in the Broadmoor subdivision.  “We have the system built there,” he says. “And we’re opening up small pockets at a time to take in customers. We’re not opening the whole system, we’re taking bits at a time, just whatever we can handle with the manpower we’ve got right now. But as time goes on we’re going to have more and more manpower installing services so we’re going to get much faster.”