A source tells the INDsider that former Lafayette broadcaster David D’Aquin has been promoted to news director at the broadcasting group he works for in Baton Rouge. There are, however, conflicting reports, and D’Aquin would neither confirm nor deny the tip. 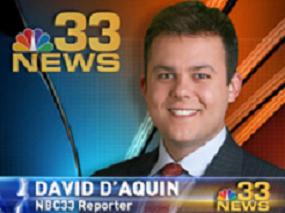 The former KATC TV3 weather-caster and reporter has been on the airwaves for about a year in the capital city as a reporter for WVLA, the NBC affiliate, and WGMB Fox44. The stations share a news team in a hybrid format that is growing industry-wide. D’Aquin is identified as a reporter on both the WVLA and WGMB Web sites. But in recently updated Wikipedia entries for both stations he is listed as news director. The group’s general manager, Jim Baronet, didn’t return a call regarding D’Aquin’s position.

Prior to moving to Baton Rouge, the affable D’Aquin served two stints at TV3 in Lafayette. He got his media start in radio while still in high school, according to identical biographies on the WVLA and WGMB sites. The D’Aquin name has a long association with Lafayette news media; Richard D’Aquin, David’s grandfather, was the publisher of The Daily Advertiser for decades in the 20th century.