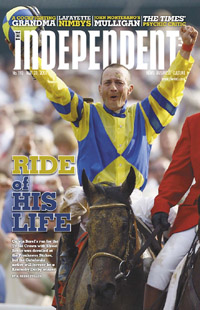 UPDATE: Bloodhorse.com is reporting that Borel has committed to ride Rachel Alexandra for the current racing season. Read the story here.

A once-in-a-lifetime horse versus a shot at racing immortality. That’s the dilemma that could soon be facing Cajun jockey Calvin Borel as he prepares for next weekend’s Preakness Stakes, the second leg of horse racing's coveted Triple Crown. It would seem a given that Borel would be atop Mine That Bird, the improbable 50-1 longshot he took to the Kentucky Derby winner’s circle.

Not so fast. Earlier this week, a partnership that includes Jess Jackson, of Kendall-Jackson wines, purchased the horse many believe to be the class of the current field of 3-year-olds, filly Rachel Alexandra. Borel piloted Alexandra to a runaway victory in the Kentucky Oaks, the female version of the Kentucky Derby (Alexandra did not run in the Derby). While Alexandra’s previous owners did not intend to run her in either the Preakness or the Belmont Stakes, the final leg of the Triple Crown, her new owners may have different ideas.

This would put jockey Borel in the difficult position of choosing which horse to run. Do you chase the Triple Crown with longshot Mine That Bird? Or go with the field favorite, a horse Borel has already declared is the best he's ever ridden. The Philadelphia Daily News reports that, when asked this week about his inclination, Borel didn’t hesitate. “[Rachel Alexandra] is a once-in-a-lifetime horse,” he said.