'Pack rat’ turns love of junk into a business. 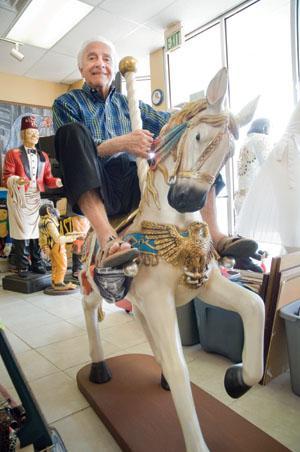 Jimmy Menutis is a class act. And he knows show business. Real show business, that is, not this stuff with the kids screaming and yelling about how they hate their mommies and daddies. Born in Houston, Texas, in 1924, he worked as an editorial cartoonist before shipping off as a war correspondent during WWII. Upon his return to the states, Menutis opened his own nightclub that rapidly became the hot spot in Houston during the 1950s and ’60s, hosting some of the biggest names in popular music of the era. Conversation with Menutis is peppered with amusing asides of some of the legends he encountered.

John Wayne: “Easy to work with.”

Jerry Lee Lewis: “Destroyed every piano he played at my club.”

Chuck Berry: “Old friend. I’d tease him about forgetting the words to his songs.”

Celebrities: “The bigger they get, the nicer they are.”

A self-proclaimed pack rat, Menutis began collecting memorabilia from his days as a  owner up until the 1980s when his wife discovered the huge amount of items he had amassed and recommend he either get rid of them or open a store. Menutis opted for the latter, launching a “junk shop” in New Orleans that he eventually relocated to Lafayette in the aftermath of Hurricane Katrina.

Menutis’ habit of collecting continues to this day with his Johnston Street shop, American Pop Art, where he sells every kind of American memorabilia you can imagine. It’s a nostalgia trip, and it’s a good one. Upon entering the store, you’re met with an avalanche of disco balls, traffic signs, totem poles, and life-size figures of John Wayne, Marilyn Monroe, and Humphrey Bogart. A Zen-like peace comes over Menutis as he sits and talks among the thousands of shards of Americana surrounding him.

“It comes from living through the Depression,” says Menutis. “You learn to appreciate little things because they were considered so precious at the time.”