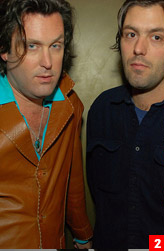 The online edition of Vanity Fair touted the premiere and after party of swamp pop documentary The Promised Land as one of the “top three parties” to have attended last week in New York City. Regal socialites with stately names like Poppy de Villeneuvea and Nikolai von Bismarck, which bring to mind grand visions of moats and ascots, were reported to have “swarmed the after-party” at a club called Sweet and Vicious with Brit-IT kids “giving the vibe an Anglo-Cajun flavor.”

Check it out HERE.