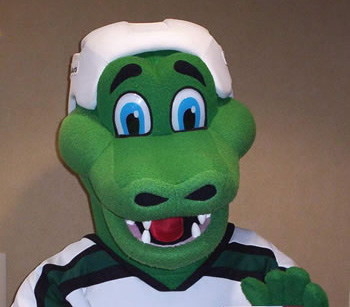 It’s time to dust off those old Ice Gator jerseys and start practicing "the chomp." Just when you thought the Louisiana Ice Gators had been forever dismissed to the penalty box of failed Lafayette sports franchises (along with the Swamp Cats and the Roughnecks), they’re back. Ice Gator hockey 2.0 is coming this fall to Blackham Coliseum.

According to a story in today’s Daily Advertiser, the minor league franchise will join the burgeoning Southern Professional Hockey League. The team is owned by local businessman Randy Smith and will be coached by former Ice Gator Ron Handy.

The original Ice Gators played in the Cajundome from 1995 until 2005 (Cajundome director Greg Davis says the dome was not approached about hosting the new Ice Gators team) and played in the East Coast Hockey League. Initially a big success, the Ice Gators set league attendance records in their first few seasons, averaging more than 11,000 fans per game. After the novelty wore off, attendance began to wane, dropping to under 1,000 people per game in the Ice Gators final season.

Obviously, the new team will hope to recapture the glory of the Ice Gators’ early years. Details will be forthcoming at a 2 p.m. press conference today at the Wingate Wyndham Hotel. No word yet on whether mascot T. Claude has signed back on with the team.