Steve Russell is taking it to a federal government he believes is out of control. The one-man show of resistance packed up his constitutional rights, two homemade protest signs and a wide-brimmed hat and hit the sidewalk across from the federal courthouse on Lafayette Street at 8:15 a.m. Monday. Russell’s signs are pointed, to say the least: “NAZI HOME LAND SECURITY SAYS I AM A TERRORIST” reads one. The other, hanging by a bungee cord around his neck, proclaims, “VITTER & BOUSTANY DON’T CARE — THEY AGREE” 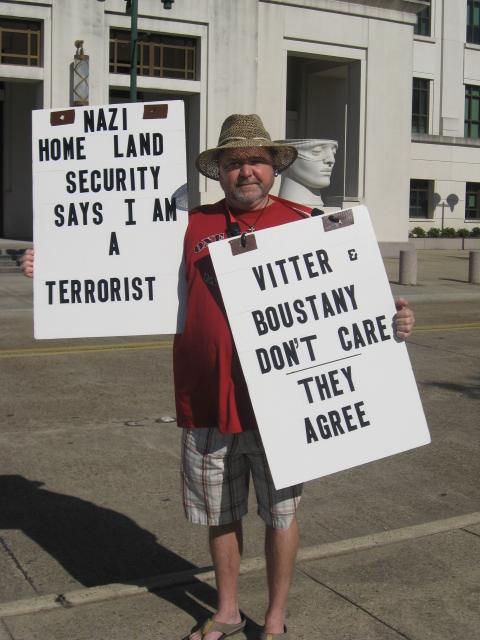 Russell is referring to an unclassified report issued in April by the federal Department of Homeland Security titled, “Rightwing Extremism: Current Economic and Political Climate Fueling Resurgence in Radicalization and Recruitment.” The report, sent to law enforcement agencies around the country, warns that returning veterans could be recruited by right-wing extremist groups. Homeland Secretary Janet Napolitano has since apologized for the report.

Steve Russell is part of a sizeable group of Americans — mostly men, mostly middle-aged, mostly white — suspicious of the government. They get their politics from Web sites like Prison Planet and Free Republic. They listen to Rush Limbaugh and Michael Savage. When they do tune in to cable, it’s FOX news. Their numbers are unclear and their borders fuzzy, but they have coalesced into at least a vocal (and often angry) minority since the election of President Barack Obama, similar to the militia movement of the early to mid ’90s during the Clinton administration.

A loose group of like-minded people in Lafayette, Russell says, are raising money to place ads in classified papers and, if they can muster enough cash, in The Daily Advertiser (assuming the Advertiser will accept the ad).

“I just have to do something,” Russell adds. “The government’s out of control and the TEA parties are good but I don’t think they’re going to be enough. The media’s laughing at them anyway, except for FOX. But basically I just felt like I had to take a stand and I hope that the pro-lifers understand — and I’m one of them, and a Christian and a veteran — that if they don’t start getting to the root of the problem, which is an out of control, fascist, socialistic federal government, it isn’t going to matter whether they believe in abortion or don’t believe in it, ’cause they’re not going to have any rights.”

Russell also has gripes with Lafayette’s Republican representatives in Congress: U.S. Sen. David Vitter and U.S. Rep. Charles Boustany. “I’ve emailed them. I’ve been here personally and talked to them, and they won’t respond to my e-mails. But there’s not a dime’s worth of difference between Republicans and Democrats, and everybody’s finding that out because we’re all listening to alternative media instead of the networks and cable news, and the game’s up.”

Russell says he plans to spend about two hours Monday morning pacing at the edge of Putnam Park across from the courthouse. The weather is glorious, and he says he may return in the afternoon for a second go at democracy. He also stations himself in front of the Chase Bank building on Jefferson Street to protest the bank bailouts. The flip side of his “NAZI HOME LAND SECURITY” sign addresses that grievance. It states, in bold black and white: “US GOVT BANKS WALL ST. CRIMINALS ONE -N- SAME”