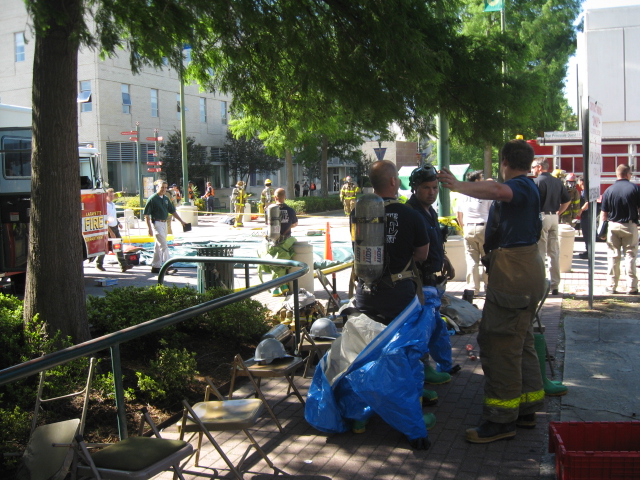 “We don’t have all the information yet. The early reports are an explosion with a possible chemical leak. Several victims with unknown status,” says Alton Trahan, public information officer for the Lafayette Fire Department.

Trahan stands at the corner of Main and Jefferson streets downtown, catter-cornered to the old federal courthouse as firefighters, EMTs, police officers and haz-mat crews swirl around him. On the opposite corner, a man in his 20s sprawls on the brick, his head covered in a sheen of moist red.

It’s only a drill, but an alarmingly realistic one for passersby who have no idea what’s going on.

According to Trahan, the U.S. Army came up with the scenario to put Lafayette first 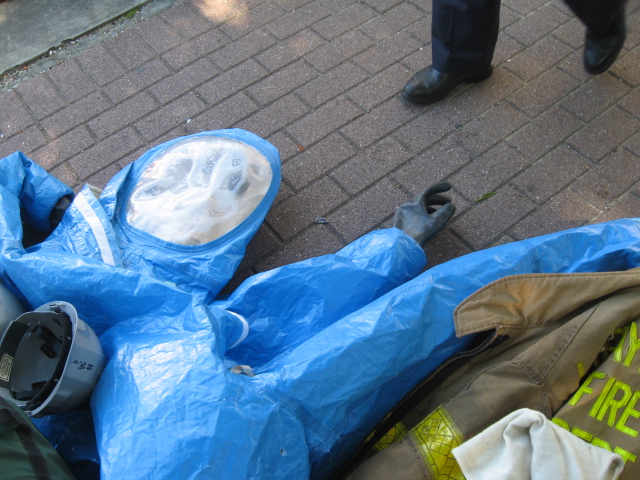 responders to the test. The local crews have no idea at the onset exactly what happened in the old federal courthouse. Terrorist attack? Gas leak and explosion? The drill began at 8:30 a.m. Tuesday and will be an all-day affair, ending sometime around 5 p.m. Right now, at 9:50 a.m., a haz-mat crew has entered the building to determine the source of danger and to look for victims. “We’re doing pretty good so far,” Trahan ventures. “We’ll see when it’s all over.”

The drill will keep the 600 block of Jefferson Street in front of the Chase Bank building closed today.