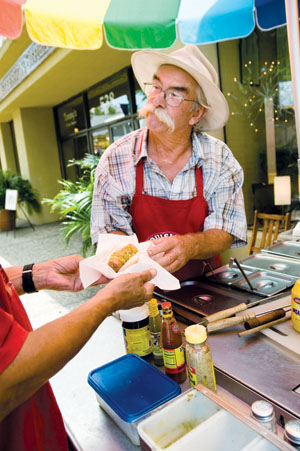 Finally, an old-time hot dog vendor on Jefferson Street! Russell Hiltz first trundled out his Grateful Dawg cart the week of Festival International. Almost a month into his tenure as the only restaurant on wheels downtown, Russell is building up a customer base of lawyers, bankers, city workers, receptionists and, well, journalists. The San Francisco native (who lived in Lafayette in the 1970s, got a degree from then-USL, moved back to California and returned to the Hub City 10 years ago) is a Grateful Dead fan, hence the name of his product. Jerry Garcia would be proud.

The secret to the Grateful Dawg is the built-in grill on Russell’s cart, the last stop for the oversized wiener before settling into a bun. “Someone once said, ‘You buy the sizzle, not the steak,’” he says with a chuckle. A Grateful Dawg is steamed to 140 degrees before rolling onto the skillet, where it crackles into a slightly crisp-on-the-outside/juicy and tender-on-the-inside hot dog. Smother it in chili, or choose from such toppings at fresh tomato, onion, jalapeño or spicy relish, along with the derigeur condiments.

Russell was a nurse by trade until January when the patient he had been providing at-home care for up and died after nine years. “I thought, ‘What can I do where I can be my own boss and be creative and do the kind of thing that I have some talent for?’” Russell recalls, “and here I am with my own hot dog cart in one of the most beautiful places in the world, downtown Lafayette.”

Russell found the dog cart on Craig’s List, haggled a deal, then drove to north Texas and returned with the cart behind his truck. The rest is mystery.

Meanwhile back at the cart on Jefferson Street, the Grateful Dawg says, “Eat me. Eat me now.” You say, “OK.”

And don’t forget to pick up a jar of Russell’s Cajun Barbecue Sauce.

Russell Hiltz’s Grateful Dawg cart is currently stationed in front of Jefferson Street Market. Russell serves from 11 a.m.-2 p.m. Monday through Friday and on Friday and Saturday nights. A Grateful Dawg sells for $2.50 ($3.00 with chili).