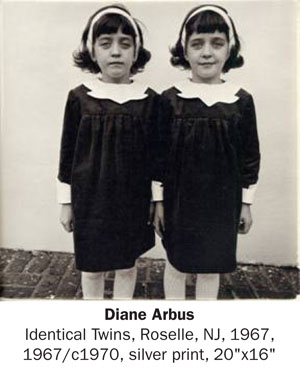 Diane Arbus is coming to Lafayette. Well, not exactly. The queen of the strange died in 1971, but her riveting photographs of people on the fringe of society, those who have dropped the mask and faced the camera with their true selves exposed, have arrived. “Most people go through life dreading they’ll have a traumatic experience,” Arbus  said.  “These people were born with their trauma. They’ve already passed their test in life. They’re aristocrats.”

Radical Vision: The Revolution in American Photography, opens May 22 at the Paul and Lulu Hilliard University Art Museum, and will be on view until Sept. 5. This exhibition explores the radical changes in American photography from the late 1940s through the late '70s.

The photographers in this exhibition — Arbus, Robert Frank, Lee Friedlander, Garry Winogrand, Mark Cohen, Bruce Davidson, Louis Faurer, Larry Fink, Allen Ginsberg, William Klein, Leon Levinstein, Danny Lyon, Susan Meiselas, Joel Meyerowitz, Lisette Model, and Bill Owens — collectively questioned the old social order to expose racism and alienation in our midst, as well as the old esthetic order in photography. They challenged the domination of the sharply focused print that exhibited a full range of tones from white through gray to black, championed by Ansel Adams and Edward Weston. In doing so, they explored oblique framing, radical cropping, and the use of the natural grain of the film, extreme close-ups, and subject matter that ranged from the dispossessed to the freakish to the oddly normal in American society.