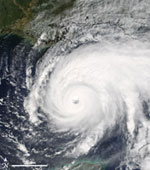 The National Oceanic and Atmopsheric Administration is predicting an average Atlantic hurricane season for 2009, which runs from June 1 to Nov. 30, but the federal agency is urging coastal residents to be prepared.

The NOAA’s Climate Prediction Center forecasts a 70 percent chance of having nine to 14 named storms, four to seven of which could become hurricanes, including one to three major storms (Category 3 or higher). Overall, oddsmakers at the agency say there’s a 50-percent probability of having a near-normal season, a 25-percent chance of an above-nornal season and a 25-percent probability that the season will be a dud.

“The outlook is not just about the numbers,” says Dr. Gerry Bell, the CPC’s lead forecaster, “it’s also about taking action. Prepare for each and every season regardless of the seasonal outlook. Even a near- or below-normal season can produce land-falling hurricanes, and it only takes one land-falling storm to make it a bad season.”

For reams of other information on hurricanes and storm forecasting, visit the NOAA’s Web site.