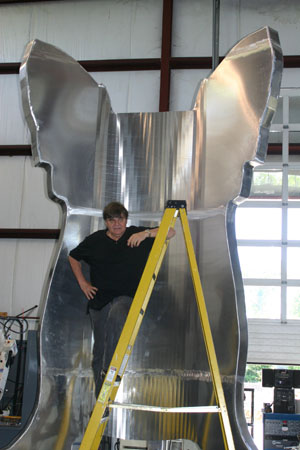 George Rodrigue was in town last week, checking on the progress of his giant Blue Dog under construction at Begneaud Manufacturing. The aluminum jumbo dog, the largest ever made, has been torched together and is being readied for a tri-color paint job. Sitting at 16 feet high, it will leap to a height of 28 feet when it’s put on a pedestal in the Memorial Park area of Veterans Memorial Boulevard in Metairie.

The friendship between Rodrigue and Don Begneaud began years ago, while Begneaud was a boy playing with metal and fire. A 13-year-old Begneaud began welding small wire sculptures when he was in middle school, studied the skill at WD Smith Career Center in high school and got into the shadetree welding business, fixing his buddies minibikes in the afternoons.

Pharmacist Roland Begneaud, Don’s father, was cousin-in-law to world-renowned artist Robert Rauschenberg. Understanding the value of art, Roland began collecting Rodrigue’s paintings very early on in the game, before 1980, when Rodrigue was still an unknown painter of Cajun scenes. So Don Begneaud grew up in a household where art was taken seriously, even though the artists were some of the most playful men on the scene. Many of the Rodrigues from his father’s collection now hang in Begneaud’s offices.  These days, the precision sheet metal parts and assemblies Begneaud manufactures with computers and lasers are the bread and butter of his business, but he still loves making art, teaming up with the Acadiana Center for the Arts, Festival International, and UL’s art and architecture programs.

“I kept running across George in airports and places like that, and we always talked about how we should do something together,” says Begneaud. “But I couldn’t figure out how.” Rodrigue picks up the story: “Finally, at lunch one day at the Blue Dog [café], I came up with a three-sided flat dog.” “I can build that,” Begneaud told him.

Before creating the jumbo dog, the company constructed 4-foot dogs and 8-foot dogs, including the Blue Dog in the New Orleans Museum of Art sculpture garden. More collaboration is in the works — the size limited only by their imaginations. Will a Blue Dog sculpture ever sit in Lafayette? Find a donor with more bite than bark, says Rodrigue, and he can tell the Blue Dog to stay.